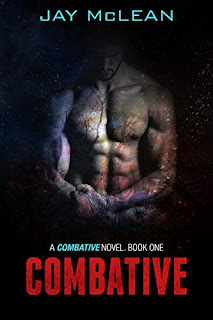 Jay McLean is one of those authors who is an automatic go-to, but I doubt I've even managed to get through a quarter of her published work. So naturally, when given the opportunity to read a couple of novels on her back list in time for the release of her latest book, who was I to miss out? Combative is the first in the series by the same name and was published in early 2015. Fair warning: This book ends in a cliffhanger, but the entire trilogy is complete, so like me, you won't have to endure any sort of wait in order to get answers to those lingering queries.

Till the age of sixteen, Kyler Parker whose home life didn't feel like much of anything, not when "home" meant a hovel that housed abuse and "life" was all about survival. At sixteen, he found a lifesaver, only to find himself in a tailspin a year later. Seven years pass and he's returned with pieces of his soul taken from him, a combat veteran with guilt and rage barely contained. When an old friend turned police detective offers him a deal to save him from certain time behind bars. Everything goes according to plan--that is, until Madison Haynes comes into the picture.

Compared to the author's books which I have read, this series starter had a completely different feel. It was dark and suspenseful and left me with a slew of unanswered questions, which I'm not going to gripe about because, hello, this does have the whole cliffhanger thing going on and with cliffhangers come issues that will be resolved in the last book. I loved Ky and I quite liked Jackson Davis, Ky's friend and a member of the Philadelphia Police Department. Madison has me curious, as does Nate DeLuca. Much intrigue awaits! I'm giving Combative five stars. ♥