Cover Reveal: Finding Our Morning by Mickie B. Ashling 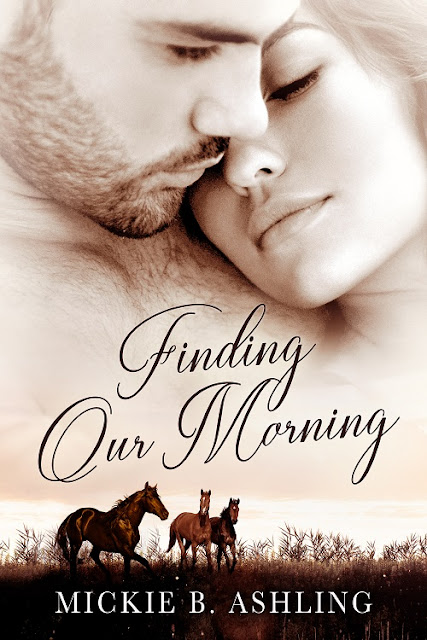 About Finding Our Morning
May 1977
Ginny Tate bides her time on the family stud farm in San Antonio, Texas, waiting to start veterinarian school in the fall. Bullied as an adolescent, she’s finally shed her old skin, but the emerging beauty still harbors insecurities and would rather hang out with horses than people.

Sponsored by his uncle, the Shah of Iran, Dariush—David—Akbari, a twenty-five-year-old NYU grad with a degree in International Law, is also a skilled polo player. He joins the royal traveling team for a tournament in Plano, Texas.

A decade in America has gradually altered David’s views on certain aspects of his culture. Torn between familial obligations and his adopted country, David resists the idea of returning to Iran so soon after graduation.

At the traditional after-party, David strikes up a conversation with Ginny, who is refreshingly honest. He receives an invitation to visit Tate Stud Farm and, on the pretext of buying another polo pony, persuades the shah to make a detour.

Great horsemanship coupled with self-effacing charm sets David apart from the entitled braggarts who normally populate the sport, and Ginny falls hard. His visit turns into a life-changing week that neither can foresee. Will they walk away unscathed or live to regret their impulsive behavior?

Inspired by events preceding the fall of the Pahlavi dynasty, Finding Our Morning is a love story that catapults us from Texas Hill Country to the epicenter of a monarchy on the brink of collapse. 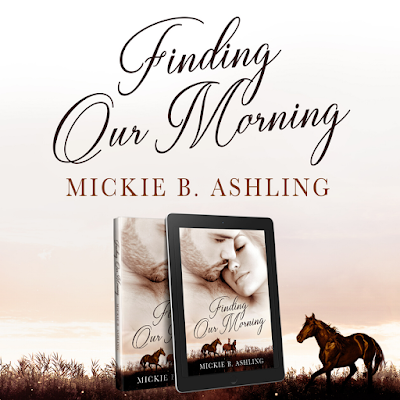 A Note from Mickie B. Ashling
Although I’ve been traditionally published since 2009 and have managed to release thirty-seven full length novels in the last ten years, Finding Our Morning is my first straight (m/f) romance. I’ve been meaning to write this for a while, but my creative juices dried up after a few chapters, so I shelved the idea. Last January, I came across the outline for this novel and decided to revisit. This time, my flighty muse perked up like a mare in estrus. Suddenly the timing was right.

In my m/m backlist, there’s a trilogy featuring polo players, and one other book rooted in Iran during the revolution, so the setting for this current novel is at once familiar yet completely different. I’m not sure why this historical event fascinates me, and I say historical with a grain of salt. Forty-three years (my story opens in 1977) isn’t that long ago, but the ouster of any ruler is significant, and this did take place in the last century—therefore, historical. Why does this moment in time resonate? Perhaps it’s because I was alive when the shah left Iran, watched it play out on TV, and, like the rest of the world, dealt with the aftermath of his decision. Or it could be the sweet Persian boy I had a crush on long ago who first generated my interest in the region. What would have happened to me if I’d followed my heart and accepted his proposal? Maybe I just have a soft spot for mysterious dark-eyed polo players with British accents. To be honest, I think it’s all of the above.

Finding Our Morning is a multicultural, interracial romance set in Texas, New York, and Tehran. The book releases on January 28, 2020. The novel will only be available on Amazon and KU. A paperback is also planned. 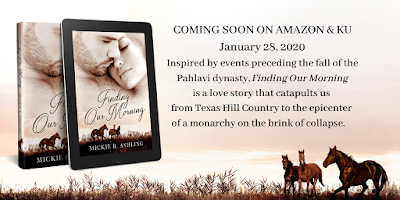 About Mickie B. Ashling
Mickie B. Ashling is the pseudonym of a multi-published author who resides in a suburb outside Chicago. She is a product of her upbringing in various cultures, having lived in Japan, the Philippines, Spain, and the Middle East. Fluent in three languages, she’s a citizen of the world and an interesting mixture of East and West.

Since 2009, Mickie has written several dozen novels in the LGBTQ+ genre—which have been translated into French, Italian, Spanish, and German. Lately, her muse has been nudging her in a different direction, and she’s learned through past experience to pay attention to creative sparks that show up unexpectedly. Her pen name is a part of her now, and will travel along on this exciting new journey, wherever it might lead. She promises to be very specific in her book blurbs and cover art to avoid any confusion.