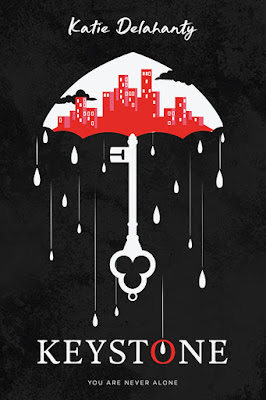 About Keystone
When Ella Karman debuts on the Social Stock Exchange, she finds out life as a high-profile “Influencer” isn’t what she expected. Everyone around her is consumed by their rankings, in creating the smoke and mirrors that make them the envy of the world.

But then Ella’s best friend betrays her, her rankings tank, and she loses—everything.

Leaving her old life behind, she joins Keystone, a secret school for thieves, where students are being trained to steal everything analog and original because something—or someone—is changing history to suit their needs.

Partnered with the annoyingly hot—and utterly impossible—Garrett Alexander, who has plenty of his own secrets, Ella is forced to return to the Influencer world, while unraveling a conspiracy that began decades ago.

One wrong move and she could lose everything—again.

An Excerpt from Keystone
“We live in an age of transparency, but never forget—at Keystone, we have everything to hide.”

Including me. A shiver runs down my spine. Above my head, a deer-antler chandelier twinkles against the wood-paneled ceiling, and a little brown bird hops from antler to antler.

“And please remember you’re required to use analog data and, on top of that, original data,” Jeff says, his eyes glinting. “If you can get your hands on it.”

Energy reverberates through the room. The kids lean forward in anticipation I don’t get. They’re excited about a challenge. Weird.

Trained to seek beauty, I spot a familiar face in the front row, and my pulse quickens. Garrett. Legs extended and arms crossed, he’s the only one who looks like he couldn’t care less what his mom is saying. Maybe he doesn’t need to listen—he’s probably been stealing since birth. I admire his chiseled jaw and dark hair mussed to obscure one eye, his puffy—if I’m honest, totally kissable—lips. He’s so perfect he can’t be real. My heart swells, and the chandeliers glow brighter, as if ignited by his presence. The air hums, atoms vibrating. He turns, his eyes connecting with mine, and sweat erupts on my forehead. I blink, finding fascination with the deer-antler chandelier overhead before he thinks I’m staring.

Again, this reaction. Maybe it’s because he’s the only person I recognize…

The little brown bird takes flight and heads straight for the closed window to my left. My body reacts before I think, and I hurl myself in front of it, my shoulder slamming against the window with a loud thud.

The bird changes trajectory and disappears into the rafters as everyone turns to stare at me.

“There was a bird,” I whisper, my face burning so hot as I slink back to my seat it’s probably fluorescent.

Whitney smiles. “I trust you will introduce yourselves to our newest Disconnect, Elisha Dewitt, at an appropriate time. Now, where was I?”

“What’s the point of succeeding if nobody knows you did?” Jeff interjects, his bold voice making everyone jump.

The heads all turn to face the stage. Except for one. His stare warms me, sending a burst of heat to my belly.

Daring a glance up, I lock gazes with his piercing green eyes. He raises an eyebrow, and my stomach contracts. There’s something about him—I can’t help it—I slowly smile back. After relying on my looks to gain popularity and win influence, some old part of me can’t resist the game. My instinct is to walk past him, hips swaying like I’m on a runway, to wet my lips, to dazzle him—to wrap him in my web until he’s mine. He’d be great for my numbers. Stupid. This is why I can’t trust my instincts. This isn’t who I am anymore.

But I can’t look away.

And neither can he. 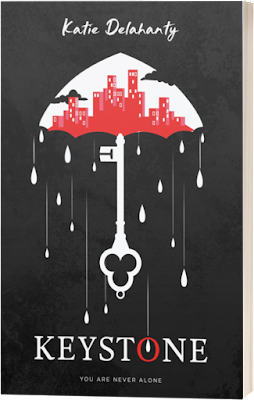 Katie Delahanty lives in Los Angeles with her husband, twin daughters, and son. Growing up in Pittsburgh, she loved old movies and playing dress up, but never considered telling stories of her own until she was asked to start a blog for the sleepwear company she worked for. Unsure what to say about lingerie, she wrote a fictional serial about a girl chasing her costume design dreams who fell in love with a rock star along the way. And that’s when Katie fell in love with storytelling. That blog became the Brightside series and she’s been waking before dawn to write ever since.