Review: The Truth About Us by R.C. Stephens (Bryant Family #1) 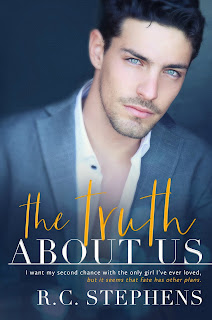 The Truth About Us is the first in a new series entitled Bryant Family and written by R.C. Stephens. This is a second-chance romance between Griffin Campbell and Jolie Bryant, who were each other's first love but whose love story ended abruptly when Griff disappeared and ghosted Jolie. Fast forward ten years later and the two erstwhile lovers are forced together when tragedy strikes. They need to maintain a united front for the sake of Jolie's grieving mother, who was more of a parent to Griff than the mother who abandoned him and the father who couldn't care less about him. Griff may have once believed he wasn't good enough for Jolie, but after achieving success as a film trailer maker, maybe this could be his second shot at being with the only girl he's ever loved. Jolie, however, isn't receptive. She isn't the same girl he left behind a decade ago. She's a widow still reconciling the husband she loved and the one she lost. All she's willing to offer Griff is friendship, no matter how much being around him stirs up old feelings. Griff, however, is ready to make his play, but will old secrets and new revelations bring it crashing down?

This book held such promise and I had high hopes for it; alas, it was bogged down by far more drama than necessary. Sure, I may be addicted to angst, but you know what they say about too much of a good thing, and that's exactly what I considered to be the biggest downside to what could have been a promising story. As if the whole reason for Griff leaving the way he did ten years prior wasn't enough of a stumbling block for his reconciliation with Jolie, as well as Jolie's own issues to do with her late husband, Mason Amos, there was the whole drama with Jolie's older sister, Jenn, and unexpected news from someone in Griff's recent past. Those two additional sources of conflict  had the drama factor boil over. I also didn't understand why Kyle, Jolie's four-year-old nephew, ended up with her rather than with Jolie's mother considering Jenn had an issue with Jolie. There was also the whole naming of their children thing that seemed...strange, but that was minor compared to the all the drama. So, The Truth About Us fell short, but I'm holding out hope Logan Bryant's book will be better. Three stars. ♥

Purchase The Truth About Us on Amazon.