Review: The Truth About Tomorrow by B. Celeste 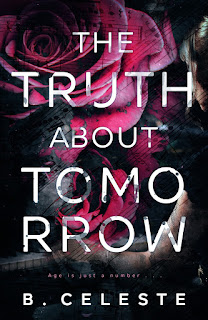 The Truth About Tomorrow is the second novel from B. Celeste and serves as a companion novel to her debut release, The Truth About Heartbreak. Both of these can be read as standalones, but if you're like me and you like reading interconnected books in order, then I highly recommend you read The Truth About Heartbreak before diving into The Truth About Tomorrow. There's some back history involved here, and I honestly think reading the books in order makes for a more well-rounded reading experience, but hey, like I said, they are both standalones. Also, just like with the first book, this second one has elements of the forbidden, though it's more amplified here than it was previously, what with the fifteen-year age gap and the shared connections the main characters share.

Charlotte Tucker bounced from foster home to foster home, but it wasn't until she was taken in and later adopted by Everett and River Tucker. With them she found not only a home but music and a family as well--a family that included her adoptive uncle, Oliver James. With Ollie, Charlie not only had a caring uncle but a true best friend. There was a decade and a half that separated them, but their bond was unlike any other. That connection wasn't broken even after Ollie left for Chicago, and soon enough, Charlie joined him there to go to school. But things were changing between them--changes that they tried to stop but couldn't because what would happen next seemed almost inevitable. Their feelings are real, but will loving each other cost them more than they thought possible?

Everett Tucker and River James's story in The Truth About Heartbreak was good, but Oliver James and Charlotte Tucker's story went several notches above theirs in The Truth About Tomorrow. If the fifteen-year age difference isn't enough of the whole taboo element--she was in her teens--take note that Charlie is Everett and River's adopted daughter, and while Everett and Ollie being best friends is complication enough, add to that the fact that River is Ollie's younger sister. See why reading the books in order is a good idea? But this wasn't just about sex for Ollie and Charlie. They had the sort of connection that, in the end, truly was worth fighting for, damn the consequences. With a whole lot of angst mixed in with the romance, The Truth About Tomorrow snags 4.5 stars. ♥

Purchase The Truth About Tomorrow on Amazon.