Review: Staying for You by Jennifer Van Wyk (All for You #3) 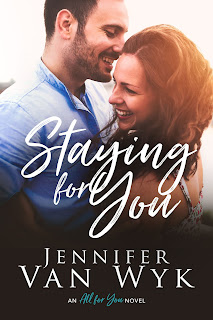 Staying for You is the third and final novel in the All for You series penned by Jennifer Van Wyk, and she's definitely ended the series on a high note with this one. Among the three books, this is the one that I feel really does work well as a standalone. Now, that doesn't mean that I don't think the first two books are worth reading--they are--but if you're new to either the series or the author, then you should feel safe diving into this latest release from Van Wyk without worrying too much that you'll feel lost. If you are familiar with this series, then you should recognize thirty-five-year-old Owen Cunningham, older brother of Olivia Johnston (formerly Cunningham), close friend to Ethan Johnston and Rex Matthews, and owner of The Escape, a resort lodge located in Northern Minnesota. Here, he meets Camilla Moore, a bestselling author in desperate need of some time away and get herself back in fighting form after the divorce that initially left her blindsided and hopes to find her missing muse. Over the next few weeks, Owen and Cami form a bond and fall in love; will it end when she returns to Tennessee?

Third time's the charm because inasmuch as I liked the first two books, I loved this third and last one! I also have nothing major to criticize, what with a beautifully written story of rediscovering the person they once were and finding not only themselves but a significant other who will change their lives forever. I'm not entirely sure how old Cami is--I'm guessing she's either in her late twenties or early thirties considering she was married for eight years to her cheating ex-husband--but both she and Owen sounded and acted their age. I say this because one of my issues regarding the first two books was how much younger the main characters seemed to act and interact as compared to their actual ages. Combine these two wonderful main characters with an equally wonderful love story plus having the rest of the recurring cast of characters out and about and showing that happily-ever-afters are still very much in full effect, and I was a happy camper! Coming into the All for You series this week, I was a Jennifer Van Wyk newbie. Three books later, and this author is one I'll be watching out for. Five stars go to Staying for You. ♥

Purchase Staying for You on Amazon.