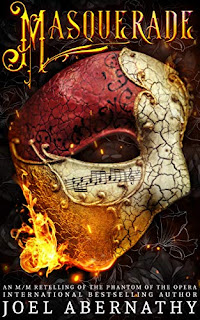 He was breathless by the time I played the final note, but I could tell from the shine in his eyes and the flush on his cheeks that he'd found the experience as enrapturing as I had. If only I could keep him here forever with me, our song would be as endless as the night sky.

Joel Abernathy was a new-to-me author prior to me reading Masquerade, an M/M retelling the literary classic by Gaston Leroux that spawned many a film and television version as well as the unforgettable award-winning stage musical adaptation by Andrew Lloyd Webber. With so many retellings nowadays of classic stories, each one with their own twist or two, I now try to look for that bit of something that allows whichever new retelling I'm reading to stand out. I want it to pay homage to the original version while also being able to stand on its own merits, and Abernathy's Masquerade has done exactly that, making this one of my all-time favorite literary retellings to date.

Set in 1889 in Paris, France, a young man named Christian strives to continue his father's dream for him. While once a in-demand countertenor, nineteen-year-old Christian has gone from center stage with a solo spotlight shining upon him to a member of the chorus, still under the lights but no longer the star his father believed he was meant to be. Someone, though, has noticed him--someone who has recognized the gift that Christian has and has decided to nurture it. To Christian, he is the Angel of Music, the ethereal-like presence whose music and wisdom inspires the younger man. When someone from Christian's past returns, his attention is swayed, enough so that his Angel appears to have morphed into an angry Phantom, and when that someone becomes a threat, will Christian be rescued by his Angel or his Phantom--or by a lonesome individual who wishes Christian would see him as Erik?

Abernathy's writing is wonderfully lyrical, composing a tale that strikes familiar notes of the well-loved story that is The Phantom of the Opera while interweaving newer elements to it, thereby striking that finest of balances. It's like listening to a familiar melody except the lyrics have changed. As much as I know the original version and the more popular adoptions, I thoroughly enjoyed diving into Abernathy's novel. Christian had an air of innocence to him but I wouldn't call him naive; Erik, on the other hand, is far more jaded, but it's the presence of Christian that somehow gives him new purpose. The notable side characters--i.e. Raoul, Madame Giry, and Meg--added texture, making an already good story even better. Masquerade is a must-read and one I highly recommend. Five-plus stars. ♥