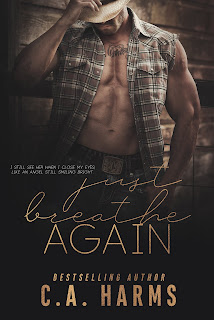 C.A. Harms's newest novel hits the spot when it comes to my angst-loving bookaholic heart. Just Breathe Again is a standalone contemporary romance and the prologue, which hits you right in the feels, sets the pace for the rest of the story. We first meet Aaron Landers, a man who has it all--a wife he loves and who loves him back, a business he co-owns with a close friend, and a daughter named Ivy who owns his whole heart--until he loses it all. Four years pass and he's left everything to do with his old life behind in Texas, moving to Gilette, Wyoming to be closer to the woman who was more mother to him than the one he was born to and to try and survive each day without the little girl he still misses terribly. Aaron's barely living, choosing to keep his distance and not engage and simply doing his job at Dusty Creek Designs while numbing the pain and guilt with alcohol. And then his boss's daughter comes back to Gilette after living in New York for four years. From the moment Aaron sees Faith Billings, he's hit with thoughts and feelings that make him want to get closer while also making him want to stay far away from her.

This book is probably my favorite from C.A. Harms to date, and not simply because I love angst and this one has a whole lot of it. There are no easy fixes when it comes to the issues confronting Aaron and Faith. For a good portion of the book, they're in this limbo of sorts, caught between a connection unlike any other they've ever experienced and Aaron's convictions regarding being in a relationship and having a family. Neither of them are perfect and they have their share of missteps, and yes, I'll be honest, there were moments of frustration on my end, but I also empathized with what they were going through. I appreciated that the struggles were not glossed over or taken lightly, that the main characters actually had to work for that happily-ever-after of theirs. Even when these two did or said things I may not have agreed with, I still cheered them on because they so deserved to be happy and in love and realize that they do, indeed deserve all the good that's right there waiting to be claimed. Harms's writing was thoughtful and well-developed, making for a wholly great reading experience. Just Breathe Again snags five stars. ♥