Review: Gone for You by Jennifer Van Wyk (All for You #1) 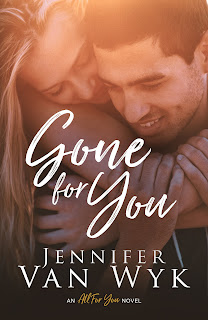 Note: A review copy was provided by the author via Love Affair with Fiction.

Jennifer Van Wyk is a new-to-me author and Gone for You is my introduction to her writing. This also happens to be the first novel in her All for You series. On the surface, it sounds like a falling-for-your-best-friend's-sibling romance trope, but that aspect of the story wasn't as big a factor as you'd think. Instead, I'd like to think of this book as more of a near-strangers-to-flirty-friends-to-committed-lovers, and it's all about Ethan Johnston and Olivia Cunningham. The two meet for the first time ten years ago and there's definite interest from the get-go, that is, until Ethan realizes that not only is Olivia his close friend slash neighbor's sister, she also happens to be only seventeen. So, when he sees a gorgeous woman sitting with friends at his bar, Ethan doesn't immediately recognize Liv as being Olivia. When it all clicks into place, it's obvious that the beautiful girl a decade ago has gotten even more beguiling, and this time around, he wants to freely pursue her. As gone for each other as Ethan and Liv may be, secrets from the past and fears of abandonment may leave these two simply choosing to be gone.

This was a good read, one that had some definite humor and lightheartedness as well as a hit of angst in the last quarter of the book. Both Ethan and Liv were easy to like and that connection between them was a clear and present thing, which I so appreciated because I've been encountering books lately where the lack of a connection made for a less than favorable experience. The supporting characters were certainly just as likable and that makes it easier for me to look forward to the rest of the series, what with my curiosity piqued and all. As far as the writing itself, Jennifer Van Wyk impressed me with her ability to put together a highly enjoyable story that entertained me from start to finish. There were times where the text did seem repetitive and numerous exchanges between the main characters that made them feel as if they were younger than they were (Ethan is in his early thirties, I think, and Liv is twenty-seven), and I had to remind myself that this wasn't a new adult (NA) read. There was also the whole "Tobasco" thing that bugged me. However, Gone for You was still a fun-filled, four-starred romance overall. ♥

Purchase Gone for You on Amazon.