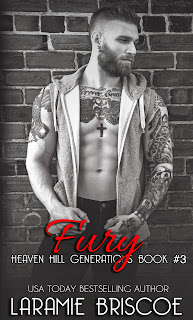 Laramie Briscoe returns to her Heaven Hill Generations series with the third book, Fury. I confess that I felt a tad lost in the first couple of chapters. I mean, I have read the first two books that came out prior to this new one, but it has been nearly ten months since Wild came out, so it may have taken me some time to recall what happened before and how it all relates to what happens in book three, which is about the club's president, Andrew "Drew" Walker, and the love of his life, Charity. Once everything clicked into place, I was finally able to fully enjoy the book.

When William "Liam" Walker passed on his patch to him, Drew Walker knew he had huge shoes to fill. The man who was his father in every sense of the word other than biologically was his inspiration and Drew took the responsibility of being the president of the Heaven Hill MC seriously, just like he did being a husband to Charity and father to their twin daughters. But someone's threatening Drew's entire family. Drew's been playing catch up, but he's fixing to finally catch the rat who's betrayed him and the club. Hell hath no fury like a club president scorned.

After playing a bit of catch up on my own story-wise, I really enjoyed this latest addition to the Heaven Hill Generations series. I figured out who the rat in the club was, but that certainly didn't diminish the anticipation of how everything would play out given that this was someone everyone had trusted and considered family. There was this suspenseful feeling from start to finish, and I simply sat back and hung on for what was an exciting ride. I'm giving Fury four stars, and I'm so looking forward to the next book. Fingers crossed the wait won't be too long! ♥

Read my reviews for the Heaven Hill Generations series: