Review: Falling for You by Jennifer Van Wyk (All for You #2) 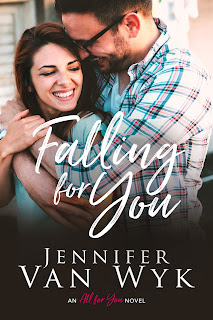 Note: A review copy was provided by the author via Love Affair with Fiction.

Falling for You is the second novel in Jennifer Van Wyk's All for You series and it's the story of thirty-two-year-old bartender and computer programmer Reginald Matthews, better known as Rex, and twenty-nine-year-old hairstylist Chloe Garcia. Going forward in this review, I'm pretty sure I'm going to mention details that will be spoiler-like for anyone who hasn't read the first book, Gone for You. Yes, the books in the series could be read as standalones, but for the first two novels, there's a story angle that's carried over from the first to the second book, so I'm going to highly recommend that they be read in order. Please consider yourselves forewarned spoiler-wise.

For fans of the series, you'll remember that Rex works at The Flying Goat, a bar owned by his best friend, Ethan Johnston, and that Chloe was the hairstylist for Olivia Johnston (née Cunningham) for a wedding AND that Chloe is Ethan's half-sister (same mother, different fathers). Book one's epilogue does overlap somewhere in the middle of book two, so while you saw how that played out on Ethan's end, you will now see it play out from Rex's viewpoint.

Rex Matthews took notice of Chloe Garcia the minute he laid eyes on her, but it wasn't until he noticed her crying that he decided to approach her. From there, the connection between the two of them grows stronger, becoming friends who clearly haven't failed to notice just how drawn they are to one another. Rex has never been in any sort of committed relationship, and Chloe is still mourning the beloved mother she lost, but somehow, they find solace and support--and more--in each other. They're used to being on their own, but maybe now, they won't have to be.

For the most part, I enjoyed this second All for You novel, and Jennifer Van Wyk has shown, once again, that she's more than capable of weaving a love story with humor and angst. Rex and Chloe were highly likable, and I was rooting for these two from the moment they got together. The book, however, does suffer from the same issues the first book did. It's possible that some tweaking--aka editing--will help weed out repetitiveness and the like. Also, the characters did come off, yet again, like they were a decade younger than they actually were, particularly when it came to their humor and a certain lack of maturity in certain behaviors, almost as if they were still stuck in high school. As was the case with Gone for You, there really were issues but Falling for You was still a 4.5-star read. ♥

Purchase Falling for You on Amazon.