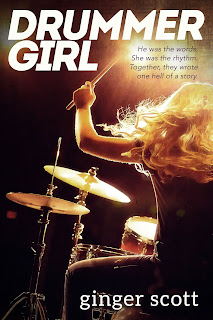 Ginger Scott is one of those authors who you simply "yes" to when a new release pops up. Among all of her books, I have yet to be wracked by disappointment, and the same goes for her newest mature young adult (YA) standalone romance--with a rocker vibe--Drummer Girl. It's about a couple of seventeen-year-olds who find the missing pieces of themselves in the other. However, that doesn't mean that they always create sweet music together, and the struggles they will have to confront before finally reaching their harmonious happily-ever-after.

Arizona Wakefield was used to living a life within the boundaries set by her family. That is, until Jesse Barringer moved into the empty house along the cul-de-sac. He was broody and seemed to have way too many issues, and the last thing Arizona would have wanted was to add his on top of hers. But it would be music that would create a bridge for these two high school seniors. Their rhythm wouldn't be that easy to find and there were guaranteed moments of discord, but if they keep on track with their music and fight for love, theirs could be the greatest ever.

It would have been easy to simply give up on Jesse because of what could have been labeled as mere "bad behavior" but this musical savant who was bipolar had layers to him, and I knew that sticking it out and seeing who he was behind it all would be worth it. I loved how Arizona and Jesse were unapologetically imperfect, and for two people as young as them, imperfections--perceived or otherwise--could spell tragedy for some. But these two fought for what they shared, and I was simply grateful to have been a witness to it all. Five stars for Drummer Girl. ♥