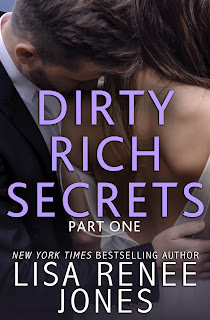 Lisa Renee Jones has done it again! She's released the first book in her new Dirty Rich Secrets series into the wild, and I KNEW there was going to be a cliffhanger waiting for me at the end. So, I was more than prepared to be frustrated. But THIS cliffhanger?! Gah! My jaw dropped and my eyeballs may have been perilously close to popping out of their sockets (okay, they weren't THAT close to popping out, but you get when I'm saying). I seriously needed answers. Book two releases in less than two weeks' time, so I'm trying to tamp down on my impatience, especially since I know that Jones has proven, time and again, that no matter how long--or short--the wait, it will be worth it.

Ashley loved Noah with all her heart, and they were ready to make a life together. That is, until she found out that everything that the man she loved told her was a lie. Now, she's no longer Ashley, and the life she once had is gone. She's hurt and angry and she feels utterly betrayed. And then the man she once knew as Noah makes his presence known. This man who she's been told is actually named Aaron is asking for her to trust him--to listen to his explanation and believe him. Her mind tells her that she shouldn't trust this man who broke her heart--but that same broken heart is giving Ashley pause. Is this part of the lie this man's been selling her, or could it be the truth?

There's really not much that I can say, especially because I don't want to accidentally spill the beans by mentioning a detail or two that could prove to be spoilery. Lisa Renee Jones has written a fast-paced quickie of a read, without a single lull throughout. Ashley's in a precarious position, what with her being unsure as to whether to trust Aaron or not. Who can she trust and even if she does trust someone, how sure is she that they won't betray her in the end? Speaking of ends, goodness, but that cliffhanger is still getting to me! I so did NOT see that coming--what happened in the cliffy, not the cliffy itself--but now the waiting game begins for part two! Five stars go to Part One. ♥