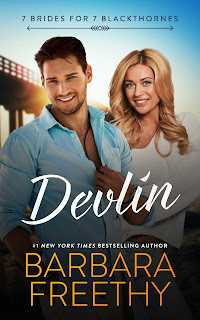 The newest multi-authored 7 Brides collection has gotten off to a good start with Barbara Freethy's offering in 7 Brides for 7 Blackthornes. The Blackthornes are a set of four brothers and their three cousins who were all raised together after the passing of their cousins' parents. Book one is Devlin and it's the story of the second eldest Blackthorne brother, thirty-year-old Devlin. He may be in charge of Blackthorne Enterprises's boating division, but he had nothing to do with the firing of Frank Reid, master craftsman, designer, and sailor and a cornerstone of Blackthorne Boatworks. That was all on Blackthorne patriarach--and Devlin's father--Graham, but it's Devlin who's confronted by none other than Hannah Reid, Frank's twenty-five-year-old daughter. He promises to discuss the matter further with his father but when things go awry within Devlin's own family, his sole focus becomes trying to bring everyone back together. Winning the Southern Maine Sailing Invitational is the key, just like when his father did it several times with his late uncle. Standing in Devlin's way, however, is Hannah, and she's intent on winning.

I've only read one 7 Brides collection--7 Brides for 7 Soldiers back in 2017--so I welcomed the opportunity to start off with this latest one, and once again, Barbara Freethy leads things off strongly with Devlin. I totally understood where Hannah was coming from when she decided to put on Devlin on the spot regarding her father's firing because I would have done the same thing had it been my father. There's a sense of love and loyalty thrumming through the veins of the two main characters, particularly when it comes to family, so considering everything that was happening between their fathers, the complication to anything romantic between them was clear. Apart from Devlin and Hannah's romantic entanglement, what piqued my curiosity was the whole dynamic going on within the Blackthorne clan. From the issues between Devlin's parents to how different the brothers and cousins are from one another, I'm curious to see how everything will play out going forward. I've also got my fingers crossed that the rest of this series is, at the very least, as good as this heartwarming series starter. Devlin easily receives four stars. ♥