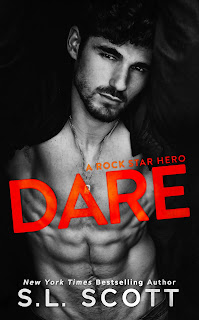 Once upon a time, a boy full of hardships and bravery found a girl with ribbons in her hair who still believed in fairy tales. The words he spoke that day were locked away until she found him again.

Through true and unconditional love, he opened her heart to their destiny. Because what he said was true: Beauty attracts the eye, but the soul captures the heart.

There's no denying that S.L. Scott is one of the best when it comes to the whole rock star romance trope, and she's back at it with her latest release. Dare is the story of two people who've lead seemingly different lives and end up sharing the unlikeliest--but ultimately lasting--of connections. Dare Marquis is the titular character; he's a twenty-five-year-old rock star in the making with true talent and dedication to his craft. He and his closest friends--who also happen to be his band mates--are used to having groupies ready and willing to hook up with them, but no one has ever snagged his attention as much as Weatherly Beck. The twenty-three-year-old law student is as gorgeous as she is whip-smart and she calls to a side of him that he's never tapped into before. He doesn't want a quick roll in the hay with the woman he's nicknamed Pepper; he wants to get to know the real her and see where their connection leads them. However not everyone thinks the rock star and the law student should have a happily-ever-after. But their destined love story demands a happy ending for the damsel not in distress and her rock star hero.

As much as I loved S.L. Scott's past rock star romance-themed novels--i.e. the Hard to Resist series and the Crow Brothers series--Dare and Weatherly's story captured my whole heart, forcing all other Scott-penned novels done a notch and claiming top spot as my favorite. This was tale of true love and how fate finds a way. I adored these two from the moment they first cross paths, and rooting for them wasn't a hardship at all. There was this connection that they shared from the get-go, and through everything that they experience as individuals and as a couple, you see that they deserve nothing less than a better, happier life together. Scott never fails to make me wish that her main characters are real people whose lives I wish I could follow even after that final page. Yes, they get their HEA, but it's almost as if the author makes good on the old adage "Always leave them wanting more," because I wanted more! Scott brings together elements of drama and humor as well as the tried and tested romance that have her readers coming back for more again and again. I dare you to try and resist falling in love with Dare. Five-plus stars. ♥