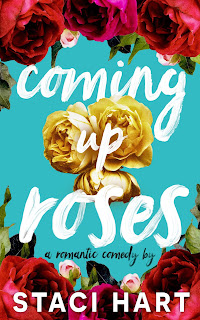 Coming Up Roses is a romantic comedy and it's the latest Jane Austen-inspired novel (but not a part of the Austen series, serving instead as a the first in a spin-off series entitled Bennet Brothers) from Staci Hart. The brood consists of Julius and Elaine (who are twins), Marcus, Kassius, and Lucas--better known as Jett, Laney, Marcus (nothing new there), Kash, and Luke, respectively--but I'm not sure if Laney is part of this series or maybe she'll be part of a spin-off. Total guesswork on my part, but you never know, right? Either way, book one is all about the youngest of the clan, twenty-five-year-old Luke, who has just returned to Manhattan after being away for five years living it up in Los Angeles. He shares the fictional spotlight with his childhood friend who seems to hate him now, Tess Monroe, who happens to be the same age and works at the Bennet family-owned Longbourne Flower Shop.

People often have something to complain about when it comes to work, but Tess Monroe loves working at the Longbourne Flower Shop and considers her boss, Mrs. Bennet, a mentor. And then Luke Bennet returns, giving Tess something to hate about. Sure, she understands that the Bennet siblings have returned to help save the flower shop from closing, but why does Luke have to head the charge? Yeah, yeah. He's charming and all, but this is the same guy he looks at her now and seems to recall nothing more than the now-non-existent friendship they once had. How could he not remember the kiss they shared?! Maybe she found it more memorable than he did. So yes, she hates Luke. It's simply better this way because not hating him would mean something way more complicated.

This was a pretty fun read, with some good laughs and even some angst amidst the romance between Luke and Tess and the shenanigans within the Bennet family. Staci Hart's Austen series had a heavier feel to it, so while this new series is a spin-off of that one, I appreciated the author giving this one a lighter touch for the sake of mixing things up (because hello, I love me my angst but I would never say no to well-written rom-com either!). I liked that there was more to Luke than how Tess saw him, and that she came to that realization without him overselling himself. Coming Up Roses was certainly a great start to a new series, and I look forward to even more. Four stars. ♥

Purchase Coming Up Roses on Amazon.