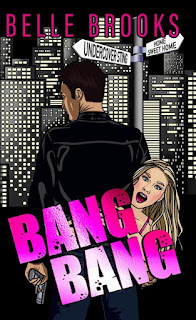 When it comes to Belle Brooks, I'm beginning to learn to expect the unexpected. My introduction to her writing was by way of her previous release, All for You, a couple or so weeks ago. It was a deeply moving love story that had me reaching for a tissue more than once. Now, she's just published a new standalone, and other than the still fantastic storytelling, it was a wholly different reading experience! Bang Bang had romance, humor, action, and suspense and two unforgettable and endearing main characters. I so love it when an author keeps me on my toes!

When twenty-year-old university student Miranda Sikes notices that Alessandro's Wedding Cakes is giving free cake tastings to engaged couples, her hunger--and the fact that Alessandro's has the best cakes ever--gets the better of her. So, what's a single girl to do? Why, she grabs the first man she sees and passes him off as her fiancé, of course! But one angry phone call, a hastily eaten bit of cake, and several gun shots later, and Miranda finds herself continuing the ruse of being engaged to an undercover detective named Haggerty. Piece of cake shebang... Right?

This was a quirky read, one that had an original feel to it from the get-go. Can I just say that I actually liked that there wasn't a whole lot of affection going on between Miranda and Haggerty/Lane for several chapters? This made if far more believable and made it possible for everything to develop between them. As if the undercover operation wasn't complication enough, these two also had a fifteen-year age gap going on, but it all made for an entertaining and enjoyable read. I can't wait to see what Belle Brooks has up for us next. Five stars for Bang Bang. ♥