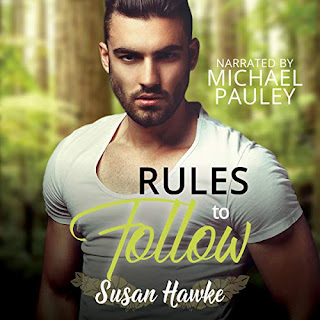 Susan Hawke's writing plus Michael Pauley's narration? Yes, please! I needn't say more, but I will, especially if you're new to this particular pairing or just to the two in general. Hawke's newest audiobook is the first in her latest series entitled Davey's Rules, and her story is taken to a whole new level of awesomeness with the vocal stylings of Pauley. The "Davey" in question is Davey Hendrickson, a young gay man who's jotted down a rule or eighty that he expects whoever his chosen "Daddy" will adhere by. The series starter isn't Davey's story, and I suspect we won't get that until either much later in the series or as the series ender. Instead Davey's part, at least in book one, is as the best friend of one of the main characters and as a guide of sorts when it comes to the world of the Daddy/boy kink.

Rules to Follow is the story of college senior Adam Nichols and lawyer Travis Miller. Adam's just escaped an abusive relationship and is in need of getting his life back in order. He takes a job as a busboy at Daddy's Lap, an exclusive private club that caters to those who indulge in the Daddy/boy kink. His curiosity is piqued while there, making him wonder if his new roommate, Travis, would make a good Daddy. But as drawn to Adam as Travis may be, he's been careful not to spook the younger man who was maltreated by an ex. He also happens to have a secret, one that may shatter whatever illusions Adam may have of him, leaving any chance of them to be more than friends and roomies forgotten.

Susan Hawke delivers a story that mixes angst with humor while not downplaying what Adam experiences by laughing it off. This isn't merely about the whole kink angle. If anything, Hawke reiterates time and again the importance of trust and that it isn't just not easily earned but it's even more difficult to keep, especially when secrets are kept. It's the titular character of Davey who provides a lot of the humorous moments in the book, which were appreciated lest the story be bogged down and become depressing. I liked the connection that Travis and Adam shared and how their relationship was never rushed. With a story as interesting as the Hawke has written, Michael Pauley does it justice by not "phoning in" in his narration, instead bringing the characters to life once again with his undeniable talent. Five stars for Rules to Follow.