Audiobook Review: Out in the Field by Lane Hayes, narrated by Michael Pauley (Out in College #4) 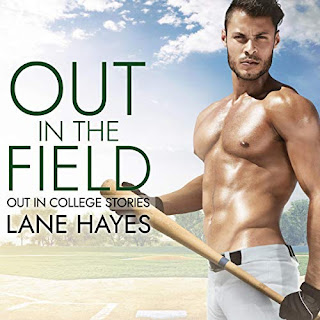 I've said it before and I'll say it again--and hell, I'll say it even when the cows come home and have no milk left to give--there's something special about the author-and-narrator partnership that is Lane Hayes and Michael Pauley. Out in the Field is the fourth audiobook in the Out in College series, which shows no signs of waning, something that I'm rather thrilled about, especially since the author has mentioned that there's a wide array of sports still to choose from as the series evolves. For this newest release, which can be listened to as a standalone, Hayes tackles college baseball, providing the perfect pitch for Pauley to knock it out of the ballpark with a spot-on performance.

If you've listened to the previous audiobooks in the series, Max Maldonado should be a familiar name, especially since he happens to be best friend and ex-boyfriend to Christian Rafferty, whose story played out in Out in the Offense alongside Rory Kirkland. You don't necessarily need to listen to the aforementioned audiobook, but me being the sort of listener who prefers listening to a series in order, I think it does make for a far more enjoyable listening experience when you're already familiar with all the back stories of interconnected story lines and recurring characters. Again, that's just me, and I honestly do think this audiobook does work well as a standalone.

An underlying theme throughout the series, at least so far, has to do with the main character who happens to still be an athlete coming to a crossroads and needing to make choice between hiding their sexuality in order to rock the proverbial boat that is the team they're part of and slash or the possible future in the professional league or making a stand and fighting for their love while also being open about who they are. The added complication here, of course, is how seemingly different Max Maldonado and Phoenix Bell are, knowing close to nothing about each other's interests. But it's those differences that make them more interesting, and as they got to know one another better, the reader gets to know the main characters as well, peeling back layers and falling for them along the way.

Lane Hayes has never failed to strike a balance in her stories, each one having this seemingly ideal mix of romance, sex, angst, and lighthearted humor, and it's on full display once again with this latest audiobook of hers. Max and Phoenix don't have the sort of love story that's got all the trimmings of a courtship made up of hearts and flowers. Theirs is a complicated tale, and trust me, these two make their share of mistakes. But it's that transforming sort of love that they share, the one that gives them the courage to look at themselves and realize that being who they are and not needing to hide it is more than okay. I don't think any other narrator could have done justice to their story like Michael Pauley did. The man's subtle vocal nuisances showcase why he's in such demand as he is and why many listeners consider him a favorite. Hayes and Pauley have made Out in the Field a five-plus-starred listen. ♥

Purchase Out in the Field on Audible | iTunes.