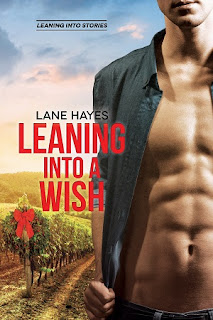 “You.” Danny tugged at one of my curls and bit his lip. “Only you. The job is nice, but I would have found a way to stay without it. You’re all I want, Ry. This sounds kind of corny but…you’re my wish.”


I have an announcement to make! Are you listening? Here we go... Daniel Meyers is mine. I mean, sure, I have to share him with Ryan Haskell, but then I don't have much choice in that matter. So yeah. There you go. Announcement made; now, on to my review for Leaning Into a Wish, the fifth addition to the San Francisco-based M/M romance series from the ever fantastic Lane Hayes. This book alone has me seriously contemplating coming up with a "holiday" category for my year-end favorites, and it shall, naturally, be sitting very handsomely at the top. This novella has two main characters who seem to have very different personalities. Ryan's often irritable (though maybe that's just with Danny) and Danny's always endearing (though Ryan would beg to differ). Can the two strike up a kinship and possibly pursue even more, even if the Colorado native may leave California after his internship?

Thirty-year-old Ryan has found home and family in Napa Valley, particularly with his bosses and fellow Conrad Winery employees. The one he's feeling a bit iffy about, however, is the twenty-five-year-old intern who's about to charming for his own good. Danny is fun, flirty, and a favorite with visitors and customers, and Ryan can't stand the guy. Maybe it's because Danny finds Ryan's prickly demeanor more humorous than off-putting. Maybe it's because all Danny has to do is smile and hearts everywhere go fluttering. Maybe it's because, if Ryan is absolutely honest with himself, hanging out with Danny has turned out to be far better than he ever expected. When Danny makes it clear that he wants more than friendship from Ryan, will Ryan take a chance on something that may be temporary?

How do I adore thee, Lane Hayes? Let me count the ways. Goodness, but how I adored this book! The combination of it being an absolutely well-created holiday read and two main characters who got to know one another and developed a relationship that went from platonic to passionate to committed at the same time that I was falling for them was so damn perfect. I was invested in these two men and their story from the moment that Ryan was making it rather clear that he disapproved of Danny's friendly and flirty banter with the winery's customers in the first chapter. Now, Ryan isn't new to the series, having been introduced in Leaning Into the Fall, and even though I felt for him because of his unrequited feelings for Wes Conrad, I wasn't a fan of his (hello, Nick Jorgensen FTW!). But talk about winning me over! His prickliness was one I could so relate to, and he proved to be a really great guy.

Now, Danny... Sigh. Ah, my Danny Boy (MINE!!!). What can I say? I swear, he had a firm grip on my heart from the get-go. He was sweet and attentive and so damn loyal. Le sigh. Sheesh. He's in my personal Book Boyfriend Hall of Fame. He was so much more than I could have hoped for and if I sound like a frickin' fangirl of a fictional character, then I'm going to totally own up to it. If Lane Hayes could come up with a character even better than Danny, I'd probably go nuts because this guy was perfection. I loved him on his own, and I loved him even more with Ryan. And yes...I'm about to sigh yet again. SIGH. But don't read Leaning Into a Wish simply for Danny. Read this book because it's fan-frickin'-tastic. From the writing to the characters to the story--this snags five-plus stars all around. ♥

Purchase Leaning Into a Wish on Amazon.