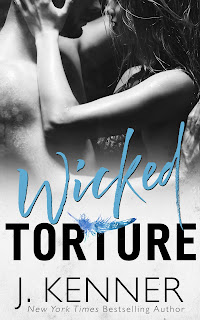 “I want to look at you and know that I’m the only man with the privilege of seeing you naked and vulnerable. The only man who can touch you. And I want you to give yourself to me, knowing that I will never want another woman. I want your surrender, baby. Basically, I want all of you.”


Ooh! J. Kenner's Wicked Nights series, which is a part of her Stark World universe, has just given me my favorite read of the weekend with the third and latest addition, Wicked Torture. If you've read the author's SIN series--her Dirtiest collection, in particular--then you may recall Noah Carter, who was part of Deliverance, a covert team dedicated to the rescue of kidnapping victims, vigilante-style. In this second-chance love story, thirty-four-year-old Noah is heading up Stark Applied Technology Austin, otherwise known as SATA, relocating from California to Texas. Leaving behind Deliverance has allowed him to slowly heal even as he continues to mourn the deaths of his wife and daughter nearly nine years ago. A familiar voice singing in a bar has him coming face to face with a part of his past he never thought he'd ever see again--Kiki King, the twenty-two-year-old he fell in love with a decade ago and whose heart he broke when he made the only choice he felt he could. He walked away from her then and needs to walk away from her now. When his potential new marketing consultant walks through the doors of SATA, however, Noah is at a loss. Because Kimberly Porter, president of Crown Consulting? She is none other than Kiki. Noah's Kiki.

Gah! How my heart broke for these two erstwhile lovers! And the thing is, I got where both of them were coming from--why Noah had to end things with Kiki ten years ago, why she's keeping him at arm's length a decade later, and why they're seriously meant to be. There's this push and pull that goes on between them and within themselves as well. I could feel how much they still loved each other, but there was also no denying that what led to their separation and all the years they missed out on continue to haunt them. We get to see Noah and Kiki vulnerable time and again here; yet we're also a witness to how, even after the most valiant of efforts to stay away from each other, they fought for their love this time around in a way they never did before. Kenner's writing here reminds of the original Stark trilogy, though if you asked me what it was specifically that makes me say this, I honestly couldn't pinpoint a single thing. It's this feeling I got as Noah and Kiki tried to figure out if this was fate giving them a second chance at getting things right or if it was a way to unnecessarily torture them. This story got to me in a way Kenner's more recent stuff hasn't. That's not say they weren't good; they were. But Wicked Torture just had that something...special--and it's what made the story stay with me, making it my new favorite Kenner read. It also has noteworthy supporting characters I can't wait to read more about, hopefully soon. Five-plus stars. ♥

Read my reviews for the Wicked Nights/Stark World series: