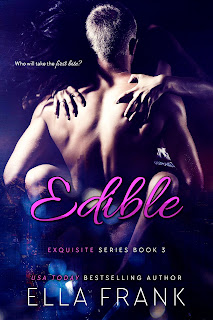 I admit it; among the three Exquisite novels, this was the one I had been anticipating most. If you're familiar with my reviews, you'll know that I don't keep my love of M/M romance a secret. A few months ago, I finally got around to reading the first three books in Ella Frank's Temptation series, which is about lawyer Logan Mitchell and bartender Tate Morrison, in preparation for, at the time, the release of the fourth book in the series, which is a spin-off of the author's Exquisite series. Logan is the half-brother of Cole Madison, who happens to be lawyer and friend of Josh Daniels and was introduced in the second Exquisite book, Entice. Cole is already married in the Temptation books to Rachel Madison née Langley, so obviously, I knew how that was all going to turn out for them. I was, however, curious as to how they got to that happily-ever-after they were living in Logan and Tate's series, which leads us to my confession at the beginning of this review. Cole and Rachel play a huge part in Logan and Tate's relationship, and I love those two to bits, so of course, I wanted to know all about how Cole and Rach began.

All it took was seeing Rachel in a sex club that first time to pique Cole's interest, and the succeeding times he had seen her around had him intrigued. There was something about her that called to him. She came off as an untouchable woman who appeared to don the persona of "super domme", but Cole can't help but wonder if she was actually in need of someone she could shed that mask off with. Someone, maybe, like him. After all, he knew all about control and what it was like to be in charge of someone else's pleasure. The trust and respect that was involved. It was clear that something in Rachel's past had led her to put her walls up, and Cole wanted nothing more than to help her break down those walls and truly embrace the woman that she was. Their coming together is intense and proves to be life-changing. Rachel is proving to be "the one" for Cole, but how can he convince her to take the greatest chance possible on what they have and that this is far more than a temporary thing for him? After one taste of what Cole offers her, will Rachel walk away or will her need for the man prove to be insatiable?

First things first: whatever love story I had concocted in my head for Cole and Rach while they were peripheral characters in the Temptation series was NOTHING like what Ella Frank actually created for them! I'm talking sweet and romantic and probably bordering on cheesy was what I thought I was going to get, because these two were exactly that in Logan and Tate's story. Of course, in hindsight, that could very well have been the result of their being a not-so-old but oh-so-content married couple. And when I started reading the Exquisite series, I went into each book blind, so clearly, I had no inkling that Cole and Rachel's story was going to be quite erotic. It was having that pre-formed idea in my head that made me pause more than once while reading Edible. It was like what I had envisioned and what was reality were two very different things. Ironic since making assumptions was what I didn't like about Lena O'Donnell and Shelly Monroe! When I finally told myself to take a breath and let go of all that stuff, I started again, and I'm glad I did because I was able to have a greater appreciation for the story these two shared.

My heart broke for Rachel after learning about what she had endured in the past, especially since she was such a pillar of support for Logan and Tate. But goodness me, she proved to be such a strong heroine, someone who refused to let her past keep its claws in her. And dearest Cole was such a revelation! He was always Logan's older brother who liked to tease him but wouldn't even think twice about protecting Logan. Remember, by the time I read this, I had already read the five currently available novels in the Temptation series, and while Cole and Rachel weren't a hundred percent who I thought they were, I could see glimpses of their loving nature when it came to those closest to them. These two loved each other fiercely, and that love of theirs came first, as it should have, but that didn't necessarily mean that their relationships with family and friends were going to be disregarded. I loved how the three couples in this series truly came together by the end, and now, I totally get why the Exquisite has the following that it does. Edible is my favorite read among the three, and I'm giving this series ender five of five stars. ♥