Review: He Loves Me... KNOT by RC Boldt 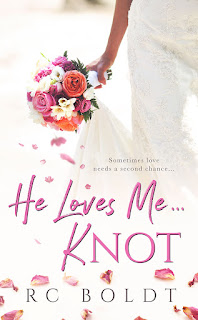 
Right as he lays his hand on the door handle, the words spill from my lips. “I’m sorry for not believing in you.”

He turns his head to the side, eyes downcast, and speaks so softly that I strain to hear him. “You didn’t just fail to believe in me, Emma Jane.” With a slight shake of his head, he finishes with, “You didn’t believe in us.” Then, he closes the door quietly behind him.


It's been nearly two years since I first discovered RC Boldt by way of her debut release, Wildest Dream, and now, I'm writing my ninth review for her ninth novel, and I love seeing how far she's come as a writer and storyteller. In He Loves Me... KNOT, we're introduced to a runaway bride by the name of Emma Jane Haywood. One overheard conversation leads her to feel not just betrayed but played in the worst way possible. She abandons her clueless groom-to-be even before she walks down the aisle, is summarily disowned by her father, and, wedding gown and all, ends up at a bar where she meets the man of her best-friends-without-benefits dreams. Eight years later, Emma Jane has a successful career in advertising and marketing at a magazine and is still very much best friends with football pro Becket Jones in Jacksonville, Florida. When the magazine is sold and she comes face to face with the new owner--none other than the man she unceremoniously left waiting at the altar, Knox Montgomery. With all their unresolved issues, is this their chance to finally get closure or is a second chance at righting all the wrongs?

I confess, I wasn't too much of a fan of Emma Jane's for a good portion of the book. I think that she allowed her emotions to get the better of her during the whole pre-wedding fiasco and then there was the whole thing about her not telling Knox something that I believe he had a right to know. Now, that doesn't mean I think she was some sort of evil woman who didn't deserve any happiness. I admired that she picked herself up after three particular life-altering events, and that she was able to make a life for herself in Jacksonville after having no other option but to leave everything and everyone behind in Mobile, Alabama. I understand how easy it is to overhear something and simply react because of the feeling of shock and betrayal. However, I think Knox said it best when he told her that it proved she didn't have enough faith in him and what they had. But she did win me over, especially because she could admit that there were missteps on her part. Does that mean Knox was perfect? Nope. The guy was a jerk at times, clouded by his resentment towards what EJ did, but it was pretty clear he was still quite in love with her.

I think what I love most about RC Boldt's stories is how she injects each one with heartfelt yet understated humor. She doesn't go for the slapstick kind of humor that may have readers snorting in laughter. No, what she does, instead, is that she brings in levity that makes the situations and interactions her characters find themselves in easier to relate to. As if I could actually picture in my head these things and conversations happening in real life and to real people. There isn't a whole lot of overblown drama in this standalone either. What you see is what you get and that's the stalemate that EJ and Knox's relationship has been in for the past eight years. The flashbacks show just how in love these two were, and even though I knew they were going to end up together once again, I wanted them to earn that happy ending. Nothing is as boring as a story that has no tension, and this one inspired had the tension between EJ and Knox that inspired quite a bit of anticipation on my end. I absolutely adored He Love Me... KNOT and giving it five-plus stars is a no-brainer. Now, the waiting game begins for Becket's own story! ♥