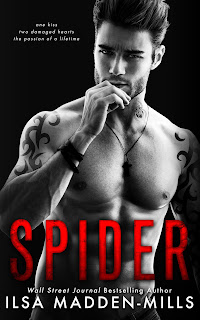 Put together a tatted wannabe rocker with a British accent whose bad boy reputation has been earned but with a heart of gold underneath that brash exterior and you've got Clarence Wainwright, nicknamed Spider by his twin sister and the name he prefers to go by. When the twenty-two-year-old finds himself seated to the beautiful college coed who goes by the name of Primrose--Rose--he doubts he could find some other girl who was as sweet and innocent as her. One kiss should tide him over; instead, it's a kiss that feels like the beginning of something...a promise of more. But when he finds out that Rose is actually his father's new wife's adopted daughter and that she's actually only seventeen, Spider knows he should keep his distance from her. He knows she deserves someone better, someone who won't sully her purity. But Spider wants only one thing and that's Rose and she wants him just as much. But his addiction is only one of the issues that plague him, and the longer he holds on to Rose, the greater the chance that he'll simply drag her down with him. His lone choice? To let go of the girl he has fallen for.

Spider is the newest release from bestselling author Ilsa Madden-Mills and it's my third read by her. It's a standalone that starts off as taboo romance of sorts (her adoptive mother is married to his father) and then shifts into a second chance romance in part two. Originally a short story entitled Love on a Plane as part of the multi-authored Valentine-inspired Beaus & Arrows anthology, this full-length novel reincarnation has been totally reworked and expanded, so even if you read the short story before, you're getting something very different with this standalone. Rose back then was Taffy, aka Primrose Farnsworth; Spider was already Clarence even before. While the short story had a humorous feel to it, this novel is far more angsty. Spider has his vices and he's very much addicted to them, plus Rose's back story isn't exactly one that brought back a whole lot of happy memories for her. Spider and Rose meet for the first time when she's eleven and he's sixteen, and then again five years later. One more rejection two years after that leads to two extra years of separation before their paths cross once again.

With everything going on with Spider, it was pretty obvious that everything was destined to fall apart early on. As much as he loved Rose and vice-versa, their situation was hopeless. Acknowledging he had a problem was one thing, doing something about it was a whole different thing. My heart went out to these two because it was as if fate was throwing one hurdle after another before they could even glimpse at a happy ending. I liked how grown up Rose was in the second part of the book, proving that what didn't kill her in part one made her stronger. For all of Spider's struggles, it was difficult not to cheer for the guy. He was far from perfect, and I know you're supposed to want to make changes for yourself, not for someone else, but being apart from Rose and ultimately having the end goal of being a man worthy of her again and seeing her move on was the catalyst he needed. Madden-Mills  clearly knows her Brits well, this being the third one that I've read from her. I know this is a standalone, but I'm hoping that we get Sebastian Tate's story next and maybe even the rest of the Vital Rejects. 4.5 stars go to Spider. ♥