Review: The Rivalry by Nikki Sloane 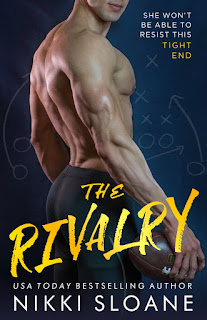 Win or lose, it doesn’t matter; as long as I have you.

Don't you love it when a book manages to surprise the hell out of you? Without having read any of Nikki Sloane's prior work, I had no idea what her writing was like or if it would click with me. I'm not necessarily a picky reader in terms of subject matter or genre. For as long as the story line calls to me, I'm willing to give it a go. The first read, however, counts for a lot. It sets a precedent of sort. If I hate it, I'm probably going to be really hesitant to read anything else the author has written or is planning to write. If I love it, well, I'm certainly going to be searching high and low for what else they've published, if they're established authors, or I'll be keeping an eye out for future releases, if they happen to be debut authors. In the case of The Rivalry, I did say I was surprised, and fantastically so! This book made me smile and laugh and had me frustrated. It was an absolute gem of a sports romance read.

I know all about rivalries, whether it be between schools or sports teams. Heck, there's rivalry between political parties, cities, siblings, neighbors, and so on. It's such a part of life for so many people that having not been involved in any sort of rivalry sounds stranger than the other way around. In the US, the rivalry between the Wolverines of the University of Michigan and the Buckeyes of Ohio State University is one the more well-known rivalries in collegiate sport, even earning the nickname of "The Game" when the two schools meet annually. Now, I don't know all that much when it comes to American football since it isn't a very popular sport here in the Philippines. I do, however, have a love of fictional football, meaning I've loved many a book, film, and TV series on the subject. And yes, I do root for a particular NFL team--the New England Patriots--because I need one to root for.

Nikki Sloane has taken that OSU and UM football rivalry and given it a romantic comedy twist, with college seniors Kayla McCarthy and Jay Harris. She's the captain of cheerleading squad for the Ohio State Buckeyes and he's the tight end for the Michigan Wolverines. He knows all about the legendary rivalry between both teams, but Kayla lives for the rivalry, something she gets from her entire family. When they meet, neither one is aware of what school the other goes to. They've got a connection that's totally worth exploring more than once, but once they do learn that she's a Buckeye for life and he's a Wolverine through and through, is there any hope for them to be anything more than rivals with benefits? While Jay respects the rivalry, he isn't consumed by it. Kayla, however, was born a Buckeye, bred a Buckeye, and will die a Buckeye...but what happens when a Wolverine wins her heart?

Kayla and Jay aren't enemies; they're more of adversaries, I guess, though Kayla is totally more into the whole rivalry thing than Jay is. If we're being totally honest here, there were moments where I found myself shaking my head in disbelief and then later smacking my forehead in frustration when it came to just how far gone Kayla was with the rivalry. I get, truly, I do, and I'm guessing that her love for the Buckeyes and corresponding hatred for the Wolverines had been so deeply ingrained within that scaling back, what more breaking from it, seemed like an impossibility. Does she come to her senses, and by that I mean coming to grips what matters more, her love for Jay or her love for her school? Yes, she does, and spectacularly so, and she gets credit her for finding a better balance.

Now, does that mean Jay was perfect? Of course not! HOWEVER, the guy comes so damn close to said perfection. Let's just say he's on my list of top book boyfriends for 2017. He was patient and understanding when it came to Kayla's enthusiasm for The Game. There were times wherein he pushed a tad too much, even as she was already giving more than even I thought possible. Still, I understood why he was pushing; maybe he just needed to learn when to back off a bit. But gah, there was no deterring me from falling for this guy in particular and for the novel as a whole. Suffice it to say, I now have Nikki Sloane on my reading radar. Maybe her other books don't have the rom-com feel of this one, but I'm willing to take a chance and see what I've missed! The Rivalry gets five-plus stars. ♥