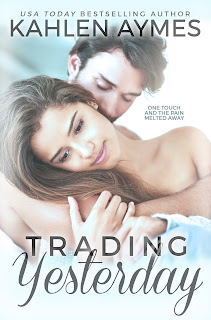 What do you do when you feel torn over a book you've just read? I tend to step away and take some time before I write my review, which is exactly what I did after I had reached the end of Kahlen Aymes's Trading Yesterday. I'm not sure what qualifications other bloggers and readers employ when they write their reviews and give their ratings for the books they read. I think a lot of it is a mixed bag--a combination of things, from how a book makes you feel to the preciseness of sentence construction and grammar and everything in between. Well, at least that's how it is in my case. At the end of the day, I can give editing errors a pass when a book is an advance reading copy (ARC), because ultimately, how a book affects me and what thoughts and feelings it stirred up while and after I read it can tilt the scales one way or the other. In short, the reader in me wins over the editor in me when at odds.

As far as being a blogger is concerned, though, I confess, I'm at a loss. Aymes's writing is noteworthy, and there's no denying that she has a talent for telling a heartrending story with a happy ending that'll satisfy many a romance reader. My issue, however, had to do with the female main character, Teagan Tessler. She was young and in love with Chase Forrester, a talented soccer player who receives the news that he's been scouted by one of the premiere football clubs in England. Teagan had her own news--she was pregnant with their baby. And then she goes ahead and makes one decision that forces their lives into opposite trajectories. It's Chase's best friend, Jensen Jeffers, who Teagan ends up marrying. When Remelia, aka Remi, is six years old, she's diagnosed with leukemia, and the need for a bone marrow transplant is what finally leads Teagan to make the decision to call Remi's father.

Sigh. Maybe I've just reached my saturation point when it comes to stories that involve one main character taking away the other main character's choice. I'm just done with whole self-sacrificing thing because it isn't always as selfless as it comes off to do, especially when the blame game comes into play. Teagan chose to not let Chase know she was pregnant. She made the choice to marry Jensen and vice-versa. They made the choice to not inform Chase for six years about Remi's existence, only contacting him because Remi's life was at stake. I found myself irritated and frustrated, and while Chase was not perfect, I couldn't appreciate Teagan supposedly sacrificing so much for him. Ugh. But, the author's writing is rather good, and I didn't hate the rest of the cast of characters. So, I'm going for the of middle ground: four stars for the writing, three for the story, averaging to 3.5 stars for Trading Yesterday. ♥