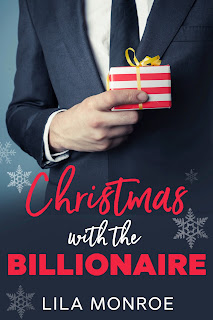 Christmas with the Billionaire is this sixth book in Lila Monroe's Lucky in Love series, but this holiday novella can absolutely be read as a standalone. This quick read pits a struggling stage actress named Jill Simon against renowned producer Oliver Gage. Getting a callback for the lead role in Serendipity could be the big break that Jill needs in order for her to show everyone that pursuing her dream was worth it. But when her audition has the panel more focused on their phones than on her performance, Jill loses it. How could they possibly say in all fairness that she wasn't fit for the role when they weren't even paying attention to begin with? She lets them know exactly what she thinks of them and walks out in grand fashion. She's pretty sure she's left quite an impression, and her theory proves to be true when she comes face to face with Oliver at a holiday party that has her serving food and drinks and then singing and dancing in the sluttiest elf costume ever. Getting stuck together during a snowstorm could give Jill and Oliver the opportunity to see each other in a whole new Christmas-twinkling light.

If you're looking for angst-free, lighthearted holiday read, look no further because Lila Monroe's new novella fits the bill. I loved Jill! She spoke her mind and who the heck wouldn't after feeling as if you gave something everything you've got only to have your efforts ignored? The fact that Oliver wasn't a jerk about it certainly earned him bonus points, and I honestly don't think his not paying attention to her during her audition was him being an ass on purpose. The story itself had a couple of surprises that I appreciated, and that isn't even including the lack of drama from former partners from either side. This is the kind of Christmas story that you can easily take with you while you tuck yourself underneath a comfy blanket and snuggle it up with a good book for an hour or so. Monroe doesn't disappoint, delivering sexy banter and crisp dialogue between Jill and Oliver. These two had that much-needed chemistry and this has enough romance and heat to keep you warm from start to finish. If you've never read anything written by the author, Christmas with a Billionaire certainly isn't a bad place to start. 4.5 stars! ♥

Purchase Christmas with the Billionaire on Amazon | B&N | iBooks | Kobo.