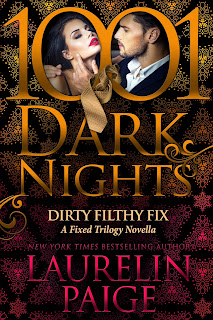 Dirty Filthy Fix is a Laurelin Paige-penned novella published under 1001 Dark Nights and is a crossover between Paige's two popular series, Fixed (the series that launched her career) and Dirty (her most recent series). Thirty-five-year-old Patricia Bisceglia is prim and proper and gets the job done as Hudson Pierce's secretary while at Pierce Industries. What that put-together exterior belies, however, is Trish's need for sex--the dirty, filthy kind. She finds it on a regular basis at Open Door, a highly exclusive club that caters to those needs. How a secretary was able to gain the coveted password that allowed her access is another thing altogether. During one of her nights there, she notices the quiet man dressed to perfection in a tuxedo. He may be looking at her group as they engage in their brand of kink, but it's Trish he chooses to focus his attention on. But even as he makes her tempting offer, she has rules, and even this stranger won't be able to make her break them...no matter how much she wants to. Of course, she never expected to come face to face with the man within the confines of Pierce Industries, and this time around, forty-five-year-old Nathan Sinclair, creative director of Reach, Inc. and friend to Donovan Kincaid and Weston King, has no intention of letting go. Nate's fixing to give her what she wants--dirtier and filthier than ever.

When Laurelin Paige promises a dirty and filthy read, she gives you that and then some. I loved how she combined the worlds of Fixed and Dirty, with Trish coming from the former and Nate from the latter, and doing so in such a seamless manner. There's sex and lots of it, but there are also hints of romance that highlight the world that Nate lives in and that Trish is surrounded by courtesy of who her employer is and the fact that she's now kinda-sorta-maybe with Nate. Now, maybe kinky sex isn't everybody's cup of tea--I do know of romance readers who purposefully stay away from books that contain anything that veers away from anything more than hearts and flowers and wholesome sex--but you've gotta love a woman who knows what she wants and isn't going to apologize for wanting it. Trish let her rules be known to Nate, and while she did ultimately break a couple of them, that was a choice she made, not one that had to be made for her. Nate also respected those rules, and as alpha as he is, he never tried to guilt or seduce Trish into breaking them for him. Dirty Filthy Fix has a story isn't overly angsty nor complicated, the sex is hot, there are cameos from the characters we've loved in the Fixed and Dirty series, and it has that Laurelin Paige brand of romance that her fans and readers crave. Need I say more? Five stars. ♥