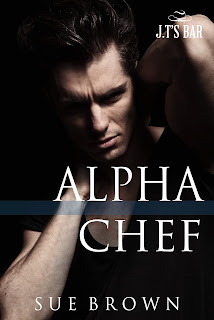 Alpha Chef is the second book in the Sue Brown-penned J.T.'s Bar series. This has the suspense thriller feel that I enjoyed in the series starter, Alpha Barman, and it's nicely balanced out by the love story that unfolds between thirty-two-year-old short-order cook Greg Mitchelson and thirty-seven-year-old US Marshal Colm Riordan. Greg's been in witness protection for fourteen years, and just when he finally thought he had a place where he could plant roots, he finds both his home and the diner he worked at burning to the ground plus his boss, who was more of a father than the man who ultimately kicked him out of the family home after finding out Greg was gay, murdered. Suspicious that someone in the US Marshals office who was a mole, Greg goes to the one person he knows he can trust--his estranged brother Cole Mitchelson, who used to be in the army but now works at J.T.'s Bar. Immediately welcomed with open arms, Greg is warmed at the knowledge that Cole and his former team members will protect him. But there's one more person who would do anything to keep Greg safe: US Marshal Colm Riordan.

If you've read Alpha Barman, you know how intense Mitch and the rest of the guys on his team can be, with Jake being the calming force behind them. So, it wasn't really much of a surprise how protective he was when Greg reappeared in his life. Mitch, aka Cole, was a hovering older brother, and understandably so, especially after he learns of Greg's life since they last saw each other nearly a decade and a half prior. Giving him a run for his money, however, in terms of intensity was Colm, aka Riordan. Colm had a thing for Greg and vice-versa, but neither one even bothered to openly acknowledge said attraction, what with Colm being the marshal assigned to Greg's case after the last marshal was killed (as a side note, I'm hoping that pans into something more as the series moves forward). I liked the romance angle of the story and the suspense part kept me on my toes, wondering if and when Greg's past would come to make him pay. There are a couple of twists in this book that caught me by surprise, and usually gets bonus points on my end. All in all, Alpha Chef proved to be as entertaining as its predecessor. 4.5 stars. ♥

Read my reviews for the J.T.'s Bar series: