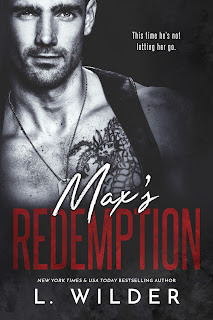 L. Wilder is back with the second installment in her Redemption series, which is a spin-off of her Satan's Fury MC series, which also happens to be one of my favorite motorcycle club romance series. Max's Redemption is the second chance love story of thirty-year-old Maxwell Lanheart, who was introduced in the series starter, Damaged Goods, and twenty-eight-year-old Harper Campbell. Max's home life growing up used to be kind that others would envy...that is, until his father had to leave the Marines and made the bottom of the bottle his escape. The man he once respected and looked up to was no more, but Max still wanted to become a part of the Corps after high school. That meant leaving behind the girl he loved, the same girl who happened to be his best friend Brody's younger sister. For Harper, not only was she going to have to temporarily let go of the boy she had fallen for years ago, but also the brother she adored, with both guys wanting to serve their country. But then tragedy struck, and losing one led to her losing the other. And then a decade later, Max and Harper meet again. He's changed and she's grown up. They've both moved on, but Max has never loved anyone other than Harper. Brody's death still haunts him, but given this precious second chance with Harper, holding on to her may mean finally letting go of the past.

Max was such a memorable supporting character in the first book, and he was the obvious choice for the second one in the series. I liked getting to know him better here, especially because I suspected he had one hell of a story to tell. The flashbacks highlighted not only how he and Harper fell in love, but also how much a part of the Campbell family he was. Brody's death made my heart clench in empathy, and I totally understood why Max felt such an immense amount of guilt over what happened. Having Harper back in his life seemed to be the balm to his tortured soul, and they were obviously meant to be together. The romance between the two was easy and not hampered with unnecessary drama. In terms of the mystery and suspense part, I will say that it was different from what I was expecting, but then that's due to my thinking that it would be in a similar vein as book one. Just when I thought the story was going in a certain direction that I believed I had figured out, the author threw me for a loop, literally leaving me with my mouth hanging open in shock. The ending was also a surprising one, but I think it was exactly the kind of end that Max and Harper needed and deserved. And now I can't help but wonder who could be up next in the series, what with two supporting characters that had potential. Five stars go to Max's Redemption. ♥

Read my reviews for the Redemption series: