Review: All of the Above by Quinn Anderson 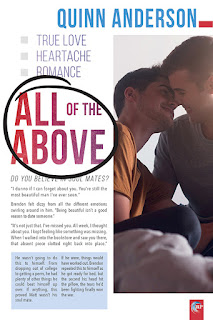 It's been a little over a year since I first came across Quinn Anderson's debut release, Hotline, and since then, she's become one of my newer go-to authors. Her latest release is a standalone and All of the Above has that bit of quirk that I've come to look forward to in each of her books and Anderson's creative flair is on full display in a love story with an unconventional beginning but a guaranteed happy ending. Readers are introduced cosmetology student Brendon while he works at the stall of Hairway to Heaven. When stall neighbor and close friend Areesh passes along some back issues of various magazines belonging to his wife Sasha, Brendon decides to while away his time until closing by perusing on title he's never read before. It's the quiz at the end of the magazine, however, that snags his attention. There are multiple choices for each of the questions that ultimately asks what the reader looks for in the perfect partner, but Brendon can't help but wonder if it's the creator of the quiz--one Matthew Kingston--who may turn out to be his soul mate. Will theirs be a story of heartache, romance, true love, or all of the above?

This book has two main characters, Brendon and Matt, and two peripheral characters, Areesh and Sasha, and they were the fab foursome that made this such a fun read! From the planned "meet-cute" that Brendon concocts to digging online for more information that he can use in order to seem more interesting and in sync with Matt, it's almost guaranteed that things will be get complicated once his deception comes to light. Well, maybe that's a tad harsh of a term. I get why Brendon felt he had to go to such lengths to both get and keep Matt's attention, but his voices of reason--Sasha and Areesh...okay, more of Sasha than Areesh--knew that he had to 'fess up sooner rather than later. I will say, though, that Matt isn't some perfect guy either. There was a time or two that I wanted to smack the guy, but hey, I know all about holding a grudge. Even though it's not as long as Quinn Anderson's Murmur, Inc. novels, it's just like its predecessor, The Other Five Percent, in that it proves she doesn't need three hundred pages in order to give her readers a story worth reading. I'm giving All of the Above 4.5 stars. ♥

Purchase All of the Above on Riptide Publishing | Amazon | B&N | iBooks | Kobo.