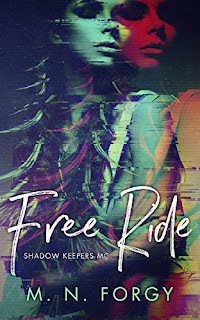 Harley Vander was six when her father took her away from her neglectful mother. Not only did her new life with the Shadow Keepers begin that fateful day, but she also met the ten-year-old boy who would become her best friend, Benjamin Daxton. Two decades later and the MC princess and the club enforcer remain the closest of friends, but while their feelings for one another have evolved into far more passionate than platonic ones, Harley has chosen to keep Benji in the friend zone. She knows he deserves someone better than a crazy woman like her who has a split personality named Farrah. Harley is also intent on proving her worth to the club. She refuses to remain nothing more than her father's daughter, waiting on the sidelines to be noticed by the male-only motorcycle club. On the other hand, Benji has also had it with being "just friends" with the woman he loves. But will Harley's persistence and her mental disorder lead into her losing everything that she wants and needs, especially Benji? Maybe it's what she will have to go through in order for her to find her truest place in the world.

M.N. Forgy already has two motorcycle club romance series under her belt--her debut series, Devil's Dust MC, and its spin-off, Sin City Outlaws--so there's no doubting she knows her way around an MC-inspired love story. With her newest release, Free Ride, which also happens to be the first in her brand-new Shadow Keepers MC series, she's taken her writing to a whole new yet somehow still familiar level. Her writing feels stronger with this one while still tapping into the very heart of her main characters, plus she's taking on dissociative identity disorder (DID), which the female main character, Harley, has been diagnosed with. As topsy-turvy as she proves to be, it's the male main character, Benji, who keeps things focused as best he can. He's easily a hero who proves his worth time and again, even as Harley goes down the path of self-destruction before coming to certain realizations about herself, her relationship with Benji, and the club that's become her family. The story keeps a steady pace, and we've got some dark twists and unexpected turns that'll make you hang on during the journey that is Free Ride. This gets four stars. ♥