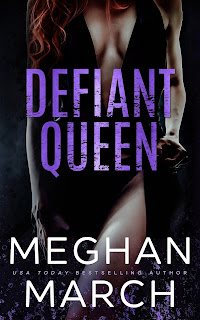 It's the scariest thing I've ever heard him say, because I'm starting to believe him.

After that devious cliffhanger that Meghan March left readers with in Ruthless King, she's pushing us to our limits yet again in the most delicious ways possible with the sequel, Defiant Queen. Book two picks up immediately after the events in the series starter, and suffice it to say that if the first book left me breathless, this second one had me fanning myself and in dire need of my asthma inhaler. Now, I've never questioned the author's ability to write hot and heavy romances. Just look at her track record, for goodness's sake! And yet, there's something about this new series of hers that's got people paying closer attention. It's darker and, dare I say, more erotic than anything she's given fans and readers before. It's got more wit than humor, and whatever levity is there is at a bare minimum, but it's enough that you don't find yourself overly burdened by any amount of heaviness that you may be experiencing.

March has done antiheroes in the past, but damn, there's something about Lachlan Mount that makes you want to smack him and then pull him in for a kiss (and then some!). As for her heroines, March has, more often than not, molded them into women who are as far from helpless as one can get, but they aren't stupid enough not to ask for help when needed either. And Keira Kilgore? She doesn't merely dish back whatever Lachlan throws her way. Nope, she isn't scared to stand up to the man who insists he's claimed her and neither does she hesitate to fling her own brand of fiery words and actions before he has a chance to. This sequel has its resolutions and revelations, and yes, it does end in a cliffhanger. God help me while waiting for Sinful Empire because after things were left hanging here, I may suffer from one Mount-induced case of desperation. All hail the Defiant Queen. Five-plus stars. ♥

Read my reviews for the Mount series: