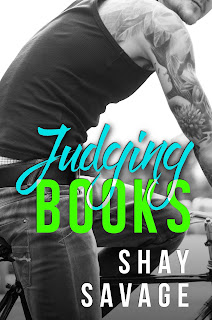 Judging Books is the latest standalone release from author Shay Savage, and it's a kinda-sorta-possibly insta-love story between twenty-six-year-old Ashlyn Dragonov and nineteen-year-old Ethan Ramsey. She's on the path that's been set before her for years. On her way to an interview for the position of assistant to the Chief Financial Officer of Dragonov Investments--a position that she's already guaranteed she's going to get--Ashlyn finds herself rushing to the office in the very Louboutin shoes her best friend said completed her outfit. Clearly, these shoes were not made for rushing on foot, but Ashlyn's soon rescued by her tatted and pierced knight in shining...metal...and two wheels. Ethan rides in on his bicycle and offers her a ride then asks her out on a date and then gifts her with a pair of pink Converse kicks. He's unlike any other guy that Ashlyn's met or been with, and she's about to learn the true meaning of the familiar but absolutely wise adage never to judge a book by its cover.

I have a soft spot for books that flip the whole May-December trope around, and while seven years may not seem like too huge of an age gap, there are certain factors in play in Ethan and Ashlyn's story, not least of which is he's technically being a year past legal adulthood but still two years away from legally being able to purchase alcohol. But see, even though he may be younger than Ashlyn, Ethan's experienced a great deal in his young life that countless others may never have to go through. His perspective on many things carries with it an air of maturity with a hint of innocence. On the other hand, Ashlyn isn't as worldly as she may seem, especially when it comes to being free to do what she wants and not merely because it's expected of her. This pairing is a unique one because it never feels as if one has more power or control over the other. Sometimes, the whole alpha male is tiresome, and all I want is a sensitive guy who showers love and care rather than kink and aftercare.

Being with Ethan brings with it certain risks to long-held laid-out plans, but he also challenges Ashlyn way of thinking, making her realize that she can forge her own path and be confident that she still has her family's and friends' love and support. Here, age really is just a number and that number doesn't come with the requisite maturity you would expect. Ethan has a way of appreciating the world and people around him, all thanks to his life experiences, and Ashlyn has shied away from certain things in her life for fear of rejection and being reprimanded. She also has her own trauma to exorcise, and I loved how the revelation of that life-changing event opened the eyes of those around her. This story and these main characters are proof, yet again, that Shay Savage isn't afraid of pushing the envelope. She tells her stories the way she wants to, and if she continues to write them as well as she does, then I'm pretty sure she will always have an audience for it. 4.5 stars go to Judging Books. ♥