Review: Came Upon a Midnight Clear by Katie Porter 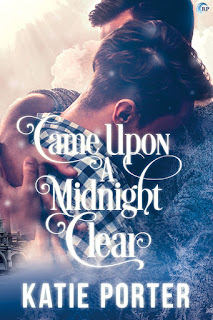 Authors Carrie Lofty and Lorelie Brown, collectively known under the pseudonym of Katie Porter, are part of this year’s Holiday Charity Bundle, which benefits the Russian LGBT Network, from Riptide Publishing by way of second chance romance entitled Came Upon a Midnight Clear. When Nathan Carnes and his stunt company, Second Chances, are chosen to work on an upcoming action movie by Pennfield Productions, Nate knows how big a break this would be for him and his team. Finding out that his high school boyfriend is one of the partners in the production company, however, quickly triggers Nate’s ire.

Kyle Wakefield was the guy Nate loved, the one he had made plans with for after high school graduation. But all it took was one mistake which led Nate to end up in prison for three years and for Kyle to look at him with disappointment and disgust the last time they had seen each other. Nine years since then, feelings—both good and bad—that they thought they had buried in the near decade they’ve been apart come rising to the surface. One other thing that’s resurfaced? Their draw to and need for each other. But with Kyle still very much in the closet, Nate must remember this can only be a temporary thing. Right?

Ah, these two pushed each other’s buttons like the erstwhile lovers that they were. It was clear that there were quite a few unresolved issues that lingered between them, but communication was something that they seemed to avoid, choosing to focus instead on the more physical aspects of their non-relationship. There was a fair amount of animosity, and I kept thinking in my head that had they taken the time to reach out AND truly talk and listen to one another since Nate was released from prison, then maybe they wouldn’t have all these questions and doubts floating around in their heads. Learn to communicate, boys!

The sex between Nate and Kyle was hot and heavy from the get-go, but the romance took a bit longer, resulting in a slow-burner, which I actually rather appreciated. I’m not one to go for second chance romances which have the main characters declaring how they never stopped loving one another early in the story. This particular trope needs to have some build-up with the characters learning to trust each other again while also earning one another’s trust in the process. I do admit, though, that there were a couple of times that I was tempted to shake some sense into Nate and Kyle to move things along faster.

I’m always fascinated with the idea of two writers working on one book together and making it difficult for the reader to figure out who wrote what and when one writer took over for the other. Of course, I get that some writing duos don’t split up their writing duties, and that’s something else that has me interested. In the case of Katie Porter, it’s clear that Lofty and Brown have the kind of writing relationship that’s been honed over the years, as evidenced by the fact that this isn’t their first time working together. They crafted a really well-written romance that I enjoyed, so Came Upon a Midnight Clear gets four stars. ♥