Review: Yours for the Holiday by DJ Jamison 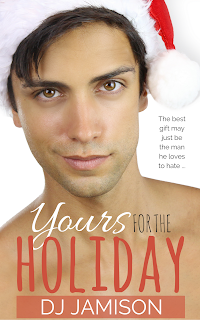 Jason Hendricks has been the unofficial member of the Wells family ever since he and Derek Wells became best friends in the third grade. He was much closer to Derek's parents than to his own father and mother. Derek's younger brother Remus, however, is a whole 'nother matter. Jason's always treated Remy like his own kid brother. From the teasing and taunting to the pranks and practical jokes, Remy experienced it all at the hands of Jason, who he nicknamed JJ as a taunt. This was brother's best friend who was more bother than brother as time went on. But Jason also happened to be the guy Remy crushed on--the same guy who made Remy realize that he was attracted to guys and not girls...that he was gay. But whatever amorous and lustful feelings he once had for Jason were replaced by frustration and irritation over the years. When the two of them are forced to share a room together during the holidays, they're both in for a surprise or two. How will Jason handle the fact that Remy's grown up in the three years since he last saw him, and how does Remy deal with Jason's confession that he's actually bisexual?

I'm all about holiday stories right now, thanks to Christmas being a month and a few days away. Lights and decorations have been up in a lot of public places for many weeks already, and we've got our tree and trimmings up here at home as well. So yup, I'm in the mood for Christmasy tales, and DJ Jamison's Yours for the Holiday hit the spot quite nicely over the weekend. This was a falling-for-your-best-friend's-sibling slash enemies-to-lovers story, and there was certainly no pretending that the not-so-loving feelings going on weren't genuine, at least on Remy's end. Having Remy getting over a breakup and Jason keeping his bisexuality a secret were interesting touches, allowing the story to stand out from others that share the same trope. I really liked both Remy and Jason--even as these two tried to pretend what was going on between them was nothing more than a holiday fling--but I wasn't a fan of Derek's. Seriously, the guy was an immature child during the latter half of the book. Grr! But he did serve his purpose, so I can't exactly hate him all that much. Yours for the Holiday is a sweet and sassy 4.5-star read. ♥

Purchase Yours for the Holiday on Amazon.