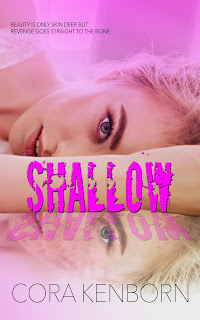 "This is you. Every time this is what you do to me, and it scares me to death."

He sucks air through his teeth, the blue in his eyes completely gone. "We're going to rip each other apart."

"I'm already in pieces," I groan, rocking against him. "Finish me."

Cora Kenborn is a new-to-me author, but if her past work is as good as her latest release, then smack me stupid because I've clearly been missing out on some stellar storytelling! Shallow is the story of Shiloh West and Carrick Kincaid--two people who, for all intents and purposes, shouldn't be together. She was the girl nicknamed "Shallow" and he was the boy his more well-off peers called "Lawn Boy". And yet, away from her judgmental teens who would end up being more foe than friend, Shiloh and Carrick clicked in a way that no one could have possibly understood. But there were times when, given a choice, Shiloh decided to be exactly who her friends expected her to be--the kind of girl that looked down her nose at someone like Carrick. However, he chose to stay close enough to watch over her...until that desire to be breathing the same air as her cost Carrick his freedom. He was sent to prison for a crime he didn't commit--a crime that Shiloh never owned up to, choosing to walk away from Carrick, their hometown of Myrtle Beach in South Carolina and on to the glitz and glamour of California. But karma always finds a way, and Shiloh's karma has a name--Cary Kincaid.

Cary and Shiloh are flawed main characters, and they make little to no apologies for those flaws of theirs. He's grown to hate the girl who used to star in his hopes and reams and now graces magazine covers. When she's sent to the community center that he opened in honor of his late sister, Cary can't help but relish the opportunity that's finally going to allow him to seek the revenge he's been longing for. He's even got himself an ally, but is this ally really someone he can rely on and trust or could this person end up wreaking more havoc than even Cary had ever anticipated doling out? Finding one thing to dislike about these two wasn't all that hard, but see, that's what I liked about them. Weird, right? Cary and Shiloh were human and they made many mistakes. They allowed the hate and selfishness get in the way of common decency and honor. But is it too late for people to change? Carrick was the good guy--the one who cared about his family, loved the girl no one thought he was worthy of, and was on his way on a full scholarship to Duke University. Prison changes people and he became Cary--the man who knew exactly who held all the blame for his life spiraling to oblivion.

There's a lot of hate that goes on here as well as quite a bit of hate sex, but don't think that that's all that's here. This is, ultimately, a story about redemption and absolution. Was Shiloh rightfully labeled as "shallow"? Yes, she was. Not only did she own up to it, she seemed to give people exactly what was expected of her, and that, in the harsh light of day, was really rather pitiful. Carrick had always seen the real her, but Cary only remembers the girl who tore his heart and life apart. Yes, he's been able to patch it back together, but he's clearly not the same guy. These two do their share of despicable things to each other, but again, keep in mind that these two are redeemable, and yes, they're still that love that they once shared when they were younger. It isn't the innocent kind of love that teenagers have; this has evolved into something that's far stronger and could stand up against any test that fate and faith may throw their way. Cora Kenborn wrote this fascinating story about two people that, at first glance, you may not choose to cheer for. But once you peel back those complex layers, you may even recognize a part of yourself in them. Shallow has depth, indeed. Five-plus stars. ♥