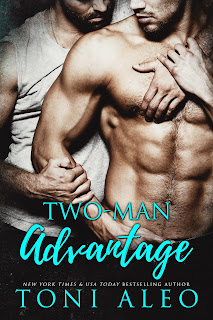 Two-Man Advantage is the thirteenth full-length novel in bestselling author Toni Aleo's highly popular Assassins hockey romance series, and it's the first one that has the author venturing into M/M romance. If you're familiar with Aleo's work, then you'll recognize twenty-three-year-old Matthew Haverbrooke, who plays for the New York Rangers and is the youngest son of the NHL commissioner, and thirty-four-year-old Wells Lumiere, who plays for Colorado. Matty is the twin brother of Avery Haverbrooke, whose story was told in the third Bellevue Bullies novel, Hooked by Love, and the implosion of their once-close relationship plays out there. On the other hand, Wells is the brother of Wren Lumiere and best friend to Jensen Monroe, whose own story plays out in the twelfth full-length novel in the Assassins series, In the Crease, and there's some overlap between that book and Two-Man Advantage.

Matty and Wells have been in a committed relationship for about two years. There's no doubting that they love each other. However, while Wells is out as a gay man, Matty isn't, fearful of the reaction from his family, particularly his father who happens to be the commissioner of the league. When Matty refuses to come clean about his sexuality, Wells decides to end things, and three months later, not only is he with a new guy, he's very much engaged. Matty is taken aback, but he refuses to believe that Wells will push through with the wedding, holding on to the hope that Wells still loves him as much as Matty loves Wells. But when one text message from Wells's best friend informs him that the wedding will, indeed, go as planned, what steps could Matty take in order to convince the man he wants and needs to give their love another shot, and will he finally come out of the closet?

I'm feeling rather torn about this particular book. It was like stepping into the middle of a story, and having no idea what happened right before that point where this one opens. I know that a lot of series tout that each book can be read as a standalone, but there appears to be quite a bit of history going on here. Yes, details are divulged as the book progresses, yet I couldn't help but feel a wee bit lost at times. That doesn't mean, however, that the story about two hockey players--one out, the other not--in a relationship wasn't a good one. It had a couple of high points, although this is a rather well-worn story line and there wasn't much that was novel about this particular story. I did like that there was angst as well as humor, with the latter courtesy of Wells's family and closest friends.

The age difference didn't feel that big of a deal, especially since Wells, honestly speaking, acted like he and Matty were both in their twenties. Maybe I was expecting Wells to be the more level-headed one between the two, but the whole pressuring of Matty to come out or else he would end things, and then entering another relationship and getting engaged, plus offering up the hush money for a blackmailer was too much, making Wells come off as the more immature one. The family drama on Matty's side was okay, especially when it came to his twin, although not everything was resolved, but then that's happened before in Aleo's other books. Two-Man Advantage is the author's first M/M story, and though there was something missing, it wasn't too bad of an effort. Three stars. ♥