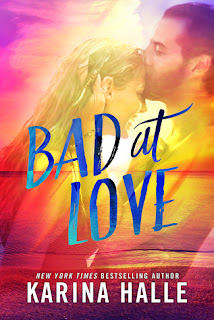 Bad at Love wasn't bad at all. It was bloody fantastic. Karina Halle's friends-to-lovers standalone romance more than tickled my fancy, with its humor and quirk and has two of the more memorable main characters that I've come across as of late. Twenty-nine-year-old Marina Owens is a beekeeper whose dating life is either stuck on the first date or the third one. She's best friends with thirty-year-old Lazarus Scott, a published poet with an Instagram fan following and the lead singer and guitarist for a Depeche Mode cover band called Magic 8 Ball whose relationships only last a month or two. After hearing Marina lament about her latest third-date disaster, Laz comes up with a plan that he thinks will benefit both of them--fake dating each other. Maybe the serial dater and the serial monogamist will be able to pinpoint what it is that the other may have otherwise missed out on. Fake dating, naturally, may lead to a fake relationship. So why does everything happening between Laz and Marina begin to feel real? If they do decide to take a chance on the real thing, will it be doomed to fail and cost them their friendship?

This one started out a bit slow for me, and I admit that the whole idea of Laz and Marina fake dating one another just seemed too silly of a prospect. But by the time that the realization that they were very much, indeed, crossing the line between friendship and intimacy,  everything about the book seemed to flow more easily. There was no doubting how much they loved each, but falling in love is a whole 'nother animal, so to speak, and let's be honest here, the transition isn't always an easy one. That's the thing though. I actually appreciated that these two had their struggles when they went from best friends to boyfriend-girlfriend. Their insecurities seemed to be lying in wait, ready to pounce and take their relationship to the brink. The question is, would they fall over or stand tall? Or maybe both? Halle has always managed to hook me in with her stories, regardless of the genre, and she's done it again with Bad at Love. This was a contemporary romance that made me smile, but it also had the angst that I'm addicted to. Those, combined with her writing and a zany cast of characters, has me giving this fab read five stars. ♥

Purchase Bad at Love on Amazon.