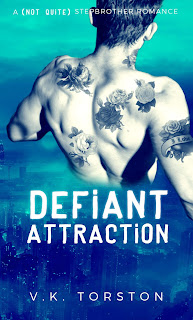 When I receive review requests, I always base my reply on two things: the synopsis or blurb and my schedule. When V.K. Torston (aka Viola) reached out to me, I confess that I hesitated for a second when I saw the word "stepbrother" because that's been more "miss" than "hit" for me in the past. But there was something about her email. She came off as sincere and humble, and that combined with the synopsis and her release date had me saying "yes". I also happen to have a soft spot for new authors who are about share their debut, because who wouldn't want to be one of a handful who gets to say, "I read her before everyone else realized what they were missing"? And you know what? That's exactly where I'm at, because Torston's first foray, aptly titled Defiant Attraction, is one of the more memorable debuts I have been privileged to have read in the past couple or so years.

Sophia Ramos is set to become her graduating class's valedictorian and her acceptance to Stanford appears to be a given. Years spent with her head bent over a book are about to pay off, and her dreams appear to be in reach. There is one particular goal, however, that she's still working on--to get her mother and the man she's with to split up. The same man who's living in their house, alongside his son who used to go to the same school Sophia does before he dropped out. That son being none other than Daniel Cole. Sophia and Dan used to make each other's lives as hellish as possible. Now, they've joined forces in hopes of getting their respective single parents to end their toxic relationship. The two have gone from enemies to unlikely allies to kinda-sorta-maybe friends. People think they're step-siblings, but the only step between these two is the one they're about to take--becoming lovers.

The taboo element involved when it comes to step-siblings falling for one another isn't really a factor here since Sophia and Dan are technically not in that category. However, the fact that they both live in the same house and her mother and his father are together does make any intimate relationship between the two somewhat illicit. But that illicitness isn't what's at the heart of this love story. Sophia and Dan may not seem like they belong together--she's the one headed for college, and he's the one who looks like he's headed for jail. The good girl and the bad boy, so to speak. But these two share some common ground, no thanks to the less than stellar, alcoholic parents that they're saddled with. There is parental neglect, implied abuse, and a violent altercation leading to a false accusation. Sophia's and Dan's parents may not have been evil, but they clearly didn't deserve to be parents at all.

I think my favorite things about Defiant Attraction were how Sophia came into her own and how Dan saw that he wasn't the screw-up that he believed himself to be. Sophia is eighteen, and I'm guessing Dan is a year or two older, so they were both at that stage where they were going to have to figure out what it was they truly wanted out of life. Sure, Sophia thought she had everything planned out, but you know what they say about well-laid plans. She was given labels by many of those around her--from her mother and school administration to her ex-boyfriend and peers--but she learned that labels didn't matter. What mattered most was how she saw herself, and with Dan at her side, providing the kind of love and support she needed and deserved, the sky's the limit for her. And Dan? Sigh. The guy was swoon-worthy indeed. Here's to the first of many more great reads from V.K. Torston. Five stars. ♥