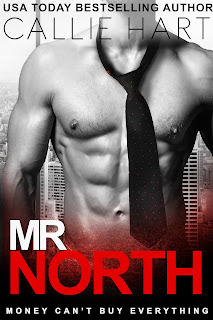 Note: This ARC was provided by the author via Candi Kane in exchange for an honest review.

Mr. North is a standalone romantic suspense novel from bestselling author Callie Hart and it's about a woman in need of an influx of cash named Elizabeth Dreymon who finds herself agreeing to become "buddies" with wealthy recluse Raphael North. Earning six thousand to play chess with the socially stunted man isn't all that bad. Things are awkward...and rather arousing, with the attraction between Beth and Raph undeniable after a short time together. Even as these two break down and give in to their lust for each other, there are still barriers that Beth seems unable to get through when it comes Raph, and those barriers could spell the end even before they have a chance at a beginning. When secrets unravel and threats are made, how far could either one go to save the other?

Prior to this latest release, I had only read one other Callie Hart-penned novel, Between Here and the Horizon, which does share a similarity with Mr. North in that the female main character in both end up working for intense men whose pasts have the women they've employed extremely wary and curious. Both books also have elements of mystery and suspense, which is why I'm going to refrain from giving any details in this review of mine that may turn out to be spoilers. But they are two different stories, so don't think that you're getting regurgitated story lines.

There are elements of BDSM in the story and Raph's own brand of reclusive alpha romance in the form of over-protectiveness, but my favorite thing about the book was the mystery behind Raph's refusal to leave the confines of his home. When the suspense factor enters the picture, it helps to create this air of anticipation that I found myself looking forward to. There were a couple of twists to the story, and while I thought I saw them coming, I was rather surprised at how far the whole conspiracy actually went! Overall, Mr. North resulted in a four-starred read. ♥