Review: The Remaking of Corbin Wale by Roan Parrish 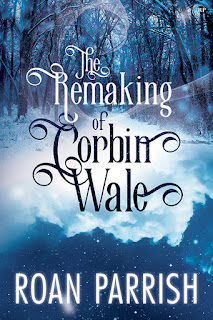 He realized that Alex was absolutely right. Love didn’t live in kisses and first dates, but in your mind and heart. In the way a person could come to dwell there, uninvited, without ever touching you. In the way you thought about them and dreamed about them and wished about them, curse be damned—because though you could choose not to act on the feelings, the heart knows no logic but its own.

This has been a year that's introduced me to authors who aren't exactly new since they have previously published work, but they are new to me. One of those that stood out among the rest (and boy, were there a lot!) was Roan Parrish. I first came across her work through the All in Fear anthology in December of 2016, but it wasn't until the middle of this year that I actually got to experience her full-length novels, two of which were new series starters (one co-written) and three that are part of her first ever series and which I had the utmost pleasure of listening to via audiobook. If you've read Parrish's work before, you'll understand why I've become such a fan of her writing, and if you've never read any of her books, I'm seriously recommending you rectify that oversight quickly.

The author's latest release is The Remaking of Corbin Wale, and it's part of Riptide Publishing's annual holiday charity collection. It's a standalone, but it does have the absolute potential for a spin-off or two (or maybe serve as a series starter) because of a couple of supporting characters—and if I'm being totally honest here, I'm REALLY hoping this comes to pass! Anyhoo, this holiday tale is unlike any of Parrish's previous novels in that it has a far more fantastical feel to it. Of course, it's still got that angst that I've come to expect and look forward to (yeah, unabashed angst addict here!) but with just enough lightheartedness and humor to not make the read overly heavy. Think of this as quintessential Parrish in terms of quality yet it being a risk of sorts, too, but a rewarding one at that.

It's been twelve years since Alex Barrow graduated from high school and headed for New York to pursue his dreams. After his relationship ends and he quits his job as a pastry chef, he finds himself back in his hometown of Ann Arbor, Michigan. The café that his parents have owned for years is signed over to him by his mother and Alex endeavors to create the bakery that he's always wanted. And Son opens its doors to customers, but there's one in particular that Alex is drawn to. Corbin Wale was a freshman when Alex was a senior in high school, and even back then, the younger man was seen as a freak. Now, the ethereal and enigmatic Corbin has captured Alex's imagination and attention ...and maybe even his heart. But is he willing to risk his life on a curse that Corbin holds to be true?

Told over four parts and in dual third-person points-of-view, this story was a slow burn romance that was both creative and endearing. Corbin is a mystery unto himself, but just like Alex first recognized, there was simply something about Corbin that I couldn't turn away from. I wanted to figure the guy out, and Alex was the perfect person for him, what with his patience, understanding, and acceptance of the man Corbin was. There's an innocence to Corbin, but don't mistake it for naivete. He's experienced things that not even Alex who has ventured away from Michigan ever has before. The interweaving of baking, superstition, and faith with love and family was interesting, and even calling it that doesn't seem to fully encompass just how enraptured I was with this book, from cover to cover.

Aside from Alex and Corbin, we've also got Gareth Kelly, Alex's best friend and a chef and he's in Ann Arbor after suffering through another abusive episode with his husband. He has a connection with Orin Wright, an artist and Alex's mom's boyfriend's son, and this is where I'm hoping we'll get another book (or two?). Maybe? Fingers crossed! There were also the dogs, in particular, Wolf, Stick, and Dreidel, as well as Carbon, Lex, Jasmine, and Finnian, all of whom I'm going to leave up to you to get to know when you pick up the book. You'll get their significance once you're done reading. All in all, The Remaking of Corbin Wale was far more than what I was expecting--and I was already expecting a lot given this is Roan Parrish's. This is, without a doubt, a five-plus-starred gem of a read. ♥