Review: Not Just for Christmas by Annabelle Jacobs 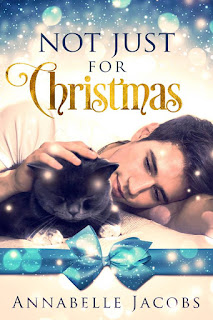 Smiling wide, Ben stepped back in invitation, but as soon as Jason stepped foot over the threshold, Ben stopped him with a hand on his chest. He pointed up at the mistletoe above their heads. "We've tried this twice now; the first was okay I guess, but the second was a non-starter." He hooked a finger in Jason's belt and tugged him closer until they were almost touching. "Third time's the charm, right?"


I've read MANY falling-for-your-sibling's-best-friend stories in all my years of reading (I'm talking decades, people!), so when I say that Annabelle Jacobs's Not Just for Christmas is one of the most adorable that I've ever read, that's saying something. This holiday novella was anything and everything I could have hoped for. It was as if Santa took a peek at my wishlist for this particular trope and decided I was extraordinarily nice this year and deemed me worthy to receive this gem. Imagine having a crush on your best friend's oldest brother for years, going off to university, and then doing a bit of growing up and having the object of your teenage affections finally see you as more than a kid. I mean, seriously, haven't we all entertained that sort of fantasy? But having some idea how one of the main characters must have felt is just one of the reasons I absolutely loved this book. Add to that Jacobs's highlighting the importance of family and friendship amidst making a go of a romantic relationship PLUS furry babies. Goodness, it had me with its cover and rewarded me with a tale that's so good it's perfect not just for Christmas.

When he was fourteen, Ben Slater developed a crush on Jason Armitage, his best friend Liam's eldest brother. A decade later, and one look at Jason and it's pretty clear that the crush is still alive and kicking. He's accepted that Jason would never see him as anything more than Liam's best friend and a pseudo younger brother. Except... Jason seems to have taken notice of the fact that Ben's grown up and done a fine job of it. The clunky glasses have been replaced with a hipper pair when contacts aren't in use, the lean frame more filled out with muscles, and the shyness overtaken by a more confident and self-assured Ben. But as attracted as Jason may be to this older and more mature version, the fact remains that Ben is Liam's best friend. Taking into consideration the eleven-year age difference between them, he isn't sure that Ben could want the same things he wants Jason does in a would-be relationship. But maybe, just maybe, with a little help from the Christmas season, a rescued cat, and Liam himself, Ben and Jason may realize that what they have the beginnings of is the gift that, if given a chance, keeps on giving.

If I haven't gushed enough over this book, let me reiterate how much I adore it and how I think that everyone should read it. I know the weeks leading up to Christmas are often among the busiest in the year, but this isn't an overly long read. You can seriously read it in an hour's time or maybe an hour and a half, depending on how fast you read. Ben and Jason were fantastic main characters, but Liam deserves due credit because he's the kind of peripheral character that helps to move the story forward without taking away attention from either Ben or Jason. Then there's Daisy, Tom, and Socks and I love it when a book has someone who has both a dog and cat together (I have several of both!) and here, the animals and pets help to make an even firmer connection between Ben and Jason. This has barely any angst in it, and you would think that an angst addict like me would be less than thrilled by that, but nope! Christmas is in the air, and the fact that there are no secrets being kept or exes waiting to make trouble here more than sates the romance reader in me. Not Just for Christmas is a 2017 favorite. Five-plus stars. ♥

Purchase Not Just for Christmas on Amazon.