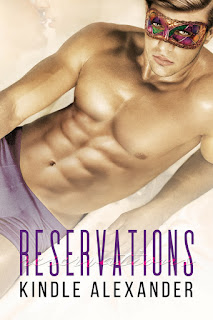 Kindle Alexander started off the year on a high with a beautifully heartrending read in Painted on My Heart, and her latest standalone has her closing out 2017 in the same manner. Reservations is the story of twenty-nine-year-old former investment banker turned restaurateur Nathaniel Walker and twenty-six-year-old medical student and legal guardian to his two younger brothers Levi Silva. The two men come from different worlds, but when their gazes land on each other while at an exclusive bar and restaurant called Reservations--a place which Thane owns and Levi works at as a waiter--the connection is immediate and electric. But neither man is looking for anything akin to a relationship, not with Levi consumed by his responsibilities to his brothers and his desire to get up from beneath the debt that's consuming them after his father's death, and certainly not for someone like Thane who prefers keeping his arrangements with men as precise as possible, down to the amount they agree upon and the time spent together. Can these two find a middle ground on which to possibly build something that'll last forever?

Thane and Levi had a lot to learn when it came to communication. Set in their ways, assumptions were made, particularly on Thane's end, and those caused a great deal of friction between him and the guy he was lusting after. Thane seriously needed to listen better because it wasn't as if Julian Cullen--Thane's and Levi's mutual friend--lacked in cluing him in on the kind of person that Levi was. I would have probably smacked Thane with that money he had left Levi. However, when Thane FINALLY realized the error of his ways, I loved how he went all in to not just convince Levi that what they had was worth taking a chance on, but he matched his words with actions, knowing full well that he had to earn this wary man's trust back. Levi brought out this softer and more sensitive side that Thane probably didn't even know existed. Learning why Thane wasn't a firm believer of love, happy endings, and committed relationships gave me a better understanding on the guy. What won me over was how he was with Logan and Luke, Levi's younger brothers, and that he wasn't using them to convince Levi to give him another shot.

I loved how Levi was with Logan and Luke. They truly were his top priority, continuing to put his studies on hold even after their father passed in order for him to be there for the two teenagers and maintain their family unit. He had certain prejudices when it came to Reservations, and that made me hesitate on my totally liking the guy. However, thank goodness there were the other waiters and Julian himself who made it clear that he should leave those preconceived notions at the door. Speaking of Julian, the guy's been such a little scene-stealer since Secret, and I adored how he didn't hesitate to knock some sense into both Levi and Thane here. He seriously needs his own happily-ever-after, and it looks like he will because Kindle Alexander mentioned that his story was coming up soon. And hello, the whole mysterious Marlboro Man thing at Reservations has me even more curious! While waiting for his book, though, I'm hopefully going to finally work my way through those four other Alexander-penned novels that I haven't gotten around to. Fingers crossed they're as good as Reservations! This gets five stars. ♥