Review: On the Way to You by Kandi Steiner 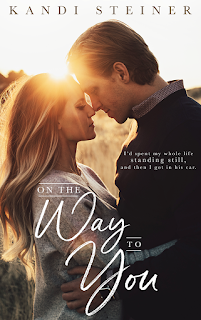 “There may be things he hasn’t told you yet. Hell, there may be things he will never tell you. But you don’t get to decide which thoughts are which, or when you get to learn more about him, or when that trust goes deeper than where it is already. You only get to be there for the ride, holding on, showing him you’re not going anywhere. And every now and then, you’ll get to see inside him — really see inside him — and you’ll cherish it. And your love will grow. And you’ll realize why you waited.”

Is it even possible for Kandi Steiner to write a bad novel? Heck, can she even write a moderately good one? Because, after having read four of her most recent standalones--Weightless, A Love Letter to Whiskey, Revelry, and now, On the Way to You--I have my doubts she can do either. I mean, have you read any or all of those aforementioned titles? Gah! Each one brought me to tears at least once while I was reading them, and while Weightless ranked as my number one Steiner-penned read, it's her latest one, On the Way to You, that looks to have, at the very least, tied it, vying for my heart like no other book has in quite a while. If you've never read anything by this author before, I beg of you to see the error of your ways and pick up and peruse her new release.

Now, why should you listen to me and read this new adult (NA) romance? It's the heartrending but ultimately hopeful story of twenty-year-old Cooper Owens and twenty-three-year-old Emery Reed. Cooper has spent the first two decades of her life in Mobile, Alabama, but she dreams of going to college in Seattle to study naturopathic medicine. She's saved up the money she's earned waitressing at the local diner, but when a new customer sits in one of her booths, all her plans are suddenly thrown to the wayside. Emery asks her two things--what makes her happy, and would she like to come with him to Washington. While she's unable to give him an answer to the first one, it's the second one, after some contemplation and a nudge from one of her closest friends, that has her stuffing a bag with her personal belongings and insisting that her beloved dog Kalo goes with them to Washington.

If you think this is merely another road trip romance, think again. Cooper and Emery are strangers who find themselves becoming unlikely companions, each one harboring certain secrets that may have the other seeing them in a harsher light. I don't want to divulge or even hint what those secrets happen to be because hello, I refuse to be the one that's accused of spoiling the book for you. What I can tell you is that this was a journey for both the main characters, literally and proverbially. They learn things about one another that make it possible for them to see something about themselves that they may have failed to take note of before or to look at things from a completely different, more objective perspective. Not everything they discover, though, is all that great. After all, that isn't how life works and it certainly doesn't come with guarantees that people only see the good in any of us.

Cooper and Emery were young and foolish, but that's precisely why I loved them as much as I did. Neither one was perfect. There were missteps--from Cooper repeatedly invading Emery's privacy and thereby breaking his trust to Emery knowingly hurting Cooper with his words and actions--but from those missteps, these two learned a thing or two, becoming both self-aware and aware of the other's boundaries and needs. Remember, Cooper was twenty and Emery just three years older, and while Cooper's life experiences were far more limited compared to Emery's, Emery had his his own limitations that made it difficult for him to always embrace his own life experiences. These two had my running through a gamut of emotions and thoughts, but they made me feel and think and had me learning a thing or two as well. Sadly, it isn't as common a feat in my extensive reading experience as I wish it was.

Aside from our main characters, I must say that Kandi Steiner gave readers an ensemble cast seriously worth crowing about. In almost every single stop they made during their trip, Cooper and Emery--although more the former than the latter--encountered several individuals and one couple who made them pause and reflect. Some of these encounters even led to turning points in Cooper and Emery's relationship. From John in Texas to Nora and Glen in Colorado Springs, from Zoey in Arizona and Antonio and Trey in Vegas, and then Melina in Laguna Beach and the stranger at Palouse Falls, each one proved to be remarkable in their own way. Oh, and let's not forget Lily, Tammy, and dear Kalo, too. If you asked me to pinpoint one thing I loved most about On the Way to You, I simply wouldn't be able to, because this book? Everything about it was extraordinary. Five-plus stars for this 2017 favorite. ♥

Purchase On the Way to You on Amazon.