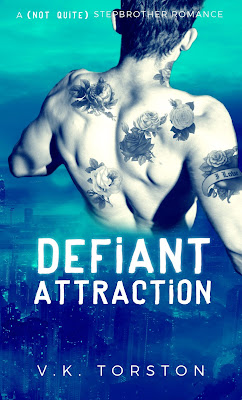 About Defiant Attraction
Dan might be the enemy of my enemy, but I'm not sure that makes him my friend. He's definitely not my 'stepbrother', no matter what everyone at school says. Honestly, I've never known what he's supposed to be to me. Or what he's becoming...

FACT: For every action, there is an equal and opposite reaction.

In the yearbook, I'll be 'Sophia Ramos, Valedictorian'. Years of honor roll certificates, AP classes, and lugging around an obnoxiously large cello case are about to finally pay off. If everything goes according to plan, I'll escape these decaying suburbs for a top-tier university across the country.

The problem? A few years ago, my mom met someone just as broke, just as drunk, and just as impulsive as she is. Approximately five seconds into their relationship, they decided it would be a great idea if he–and his son, Dan–moved in with us. (Spoiler alert: it wasn't)

Now I share a house with none other than Daniel Cole. Even though he dropped out two years ago, he's still the tattooed, bad boy, heartthrob, legend of St. Anthony's Academy. He and I aren't supposed to have anything in common.

Living together means war. First, Dan and I were at war with each other. Now, our rivalry is giving way to an unlikely alliance–two opposing sides teaming up against a common enemy: our respective parents.

Which is to say, we've been hanging out.

QUESTION: What happens when an unstoppable force meets an immovable object?

Here's the thing: my brain is a complex organ. One hundred billion neurons, each averaging seven thousand connections to other neurons. My brain is my ticket out of here.

My heart, by contrast, is a pump. It moves blood around.

I know Dan is off-limits. I know I shouldn't do something I regret. And I know how much is at stake (my family, my future).

So why can't I stop thinking about him? Those inscrutable jade eyes. The smile that can say a thousand things at once. That tattoo curving across his abs...

Even though I know better, I feel that pounding in my chest. And it's getting harder to ignore.

But if I follow my heart, I can never go back.

ANSWER: There is no such thing as an immovable object. 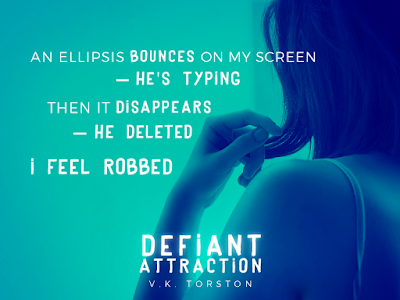 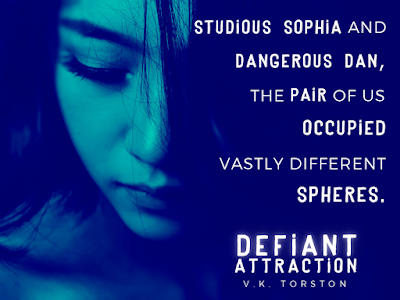 About V.K. Torston
V.K. Torston is a millennial and "cool aunt" to a brood of nieces and nephews. A veteran of the independent music scene, she began writing nonfiction in her late teens. Then she realized that making up stories was way more fun than coming up with endless synonyms for "frenetic" and "danceable". Her hobbies include drinking too much coffee, making up stupid songs, and ranting about current events. Defiant Attraction is her first novel.