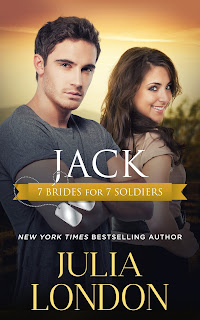 The multi-authored 7 Brides for 7 Soldiers series is about a group of seven close friends from the town of Eagle's Point, Washington, each one serving in their preferred branch in the military. It began with Navy pilot Ryder Westbrook, followed by Coast Guard rescue swimmer Adam Tucker, then his twin Zane who was a cavalry scout in the Army, and the fourth being Navy SEAL Wyatt Chandler. The fifth book, Jack, is penned by bestselling author Julia London, and it's about former Marine turned writer Jack Carter. Suffering from post-traumatic disorder, the formerly social and amiable young man nicknamed "Romeo" finds himself unable to leave the confines of his home. With only his therapy dog, Buster, Jack barely makes it outside of his apartment, relying instead on delivery service and even a dog walker for Buster. One of those services is Dinner Magic, and three times a week, the same "chef" shows up in his apartment to cook and plate the same meals that he's chosen. He makes sure to stay out of her way, not prepared to interact, but once he meets the chatty and beautiful Whitney Baldwin, Jack's life changes.

My favorite character in the book was, hands down, Whitney. She had graduated from law school but refused to take the bar exam knowing full well that she wasn't meant to become a lawyer like her father. She decided to pursue her dream of opening her own bakery and moving from Orange County, California to Seattle, Washington. On the other hand, Jack finds himself unable to return to his hometown of Eagle's Point, and stays in Seattle instead. So, how does a man suffering from PTSD and agoraphobia and a go-getter of a woman putting herself out there find a way to make a go of their relationship? Well, trust me when I say it isn't easy, and I appreciated that the author didn't try to water down or temper Jack's phobia and his struggles with trauma. There were no easy or quick fixes for what he was going through nor was Whitney some saintly woman who was the epitome of everlasting patience and understanding. They were both human and try as they might at times, they inadvertently hurt one another. So far, Jack is easily my favorite book in the 7 Brides for 7 Soldiers series and it receives five stars. ♥