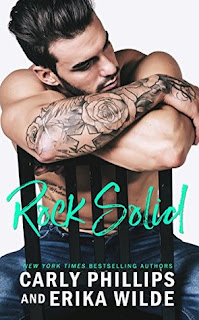 Rock Solid is the fourth and final book in the Carly Phillips and Erika Wilde co-authored series entitled Book Boyfriend. Connor Prescott's the only single guy left among the foursome that owns Premier Realty. He's glad that his closest friends plus his younger sister have found happiness. He's yet to find the sort of connection with someone that'll have him realizing that she's what's been missing in his life. No, that's wrong. He's actually found that connection before--three years and seven months ago, to be exact, during a snowstorm in Colorado that forced him to stay one extra night before flying back to Chicago. But after the most amazing time he's ever had with a woman, she ghosted him, leaving nothing more than a note behind. Fast forward to today and one magazine cover story later. Connor receives a phone call from the woman he's never forgotten: Katie, and now she's got a last name--Kaswell--to go with the first one. When she asks to meet him, he readily agrees. Maybe she wants to reconnect and explore what they didn't fully have a chance to before. Or maybe Katie simply wants to tell him four words he never saw coming, four words she's been wanting to tell him for years: "You have a daughter."

The Book Boyfriend series ends on a rock solid note (pun intended, of course) with this fourth and final installment! The whole one-night-stand-with-an-amazing-connection-that-ends-in-pregnancy story line has been countless times before, but I liked Phillips and Wilde's touch of neither Connor nor Katie having any clue as to each other's last names, thus making it nearly impossible for them to hunt the other down in hopes of more. As intense as that one night of theirs may have been, however, these two didn't really know each other all that well, so I'm glad that readers are given the opportunity to see them grow into their feelings for one another, feelings that went beyond lust. The one thing I thought weird was the first round of phone sex they had, simply because it seemed to come out of nowhere, but hey, if it got the door open for them to interact more with each other rather than just Connor interacting with his daughter, Valentine. Speaking of Val, she was an adorable peripheral character, as was Avery, Katie's best friend. Val brought the cute factor and Avery was the voice of reason that Katie desperately needed. Rock Solid is easily my favorite book in this four-book series, and gets 4.5 stars out of a possible five stars. ♥