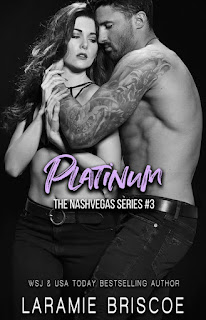 Note: An advance reader copy (ARC) was provided by the author via Give Me Books Promotions.
The wait between books was rather lengthy (about seven months between Power Couple and Breach of Contract and around nine months to get to this point), but now, we finally get the third and final book in the NashVegas series from Laramie Briscoe. Platinum concludes the story of Everett James Thompson and Brianna Jenkins-Thompson. The books must be read in order because it does feature the same couple throughout and a continuing story line that finds everything regarding EJ and Bri nicely resolved and giving them that much deserved happily-ever-after they've both been working towards.
Change is in the air for EJ and Bri, and while change can be good, it can also bring with it a heck of a lot of complications. Here, this power couple learn how going on your own in the music industry is far easier said than done. While their relationship appeared to be on solid ground and nearly issue-free, my heart broke for RJ and, in turn, EJ's relationship with his brother. I really hope we get RJ and Montgomery's story told sometime soon because I would love to see him get his life together and for them to work through whatever issues so that they can get their happy ending, too. All in all, Platinum served as a good conclusion to this series. More novella in length, this was a four-starred wrap-up.
---------------------------
Read my reviews for the NashVegas series: