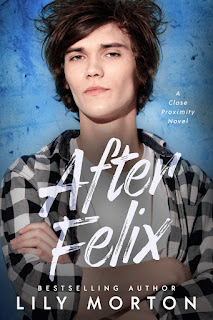 "I'm just hoping for a very happy ending with you, Felix."

"And how long will you wait?" I ask softly.

His cast catches at my skin and he soothes it with his fingers before pulling me forward and kissing my forehead. "I don't think I'll ever stop waiting," he whispers.


Lily Morton saves the best for last in this third and final novel in her Close Proximity series! After Felix is a second chance romance with a bit of an age gap angle to it, what with the main characters, Felix Jackson and Max Travers, being in his twenties and thirty-seven, respectively when they first meet. Told in two parts--before and after their break-up--we've got two men who engage in what was supposed to be nothing more than a hook-up, albeit an unforgettable one, that leads to a string of monogamous hook-ups before unrequited feelings (so not getting into what I mean by that descriptive label at this point) get in the way and mess everything for the two.

For those familiar with the author's previous releases, Felix Jackson works as the personal assistant of Zeb Evans, whose own story plays out in Best Man (Close Proximity book one), and he's the cousin of Misha Lebedinsky, who gets his happily-ever-after in Charlie Sunshine (Close Proximity book two). On the other hand, Max Travers is Zeb's stepbrother and is best friends with Ivo Robinson from Risk Taker (Mixed Messages book three). That doesn't necessarily mean that you need to read any of the aforementioned titles in order to fully enjoy or understand the story that's told in this new book. However, go read them anyway because they happen to be fab.

When Felix Jackson meets Max Travers for the first time, the former has no idea who the latter is, but that doesn't stop either of them from engaging in one memorable hook-up. Felix walked away believing it was a one and done, but one phone call opens the door to several more from Max, particularly whenever the mood for another hot hook-up tickled his, erm, fancy. Their new arrangement was clear: it was all about satisfying their lustful cravings, and there was absolutely no room for any lovey-dovey emotions. But Felix falls for Max, a man in love with someone else. Two and a half years later, Felix continues to move on, but what's life for Max after Felix?

I confess that I require a bit--a whole lot--of groveling from the party that caused the break-up when it comes to a second chance romance. I need to believe that said party is in it for both redemption and reconciliation, and goodness but how Max proved that time and again. The heartbreak that both he and Felix had to endure, as well as a whole lot of missteps and miscommunication, from the time that everything ended and the two and a half years that followed may seem wasted but I think that it it was necessary for them so as to come to certain realizations. It was also fun to see some familiar "faces" in the story, making an already wonderful read a smidgen more endearing. Kudos to Lily Morton for yet another five-plus-starred read in After Felix.

Read my reviews for the Close Proximity series:

After Felix (book three) - five-plus stars - My Review (posted above)

Purchase After Felix on Amazon.